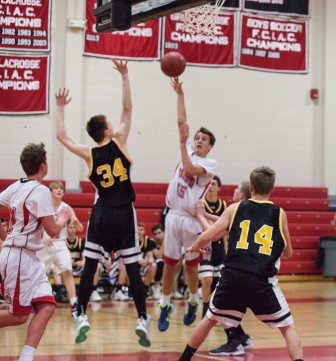 New Canaan trailed in the first quarter, 11-19, as Trumbull’s powerful offense and defense didn’t let up. Matthew Brand and Luke Rwambuya each contributed two layups, with Stephen Wronski hitting a two point jumper. Wyatt Wilson sank a foul shot after being fouled on a layup at the end of the first quarter. The Rams fought hard in the second quarter with layups by Ben Sarda, Jack Richardson and Brand as well as a three point buzzer beater by Wronski to close the half 23-30. The Rams came on strong in the third quarter with offensive and defensive rebounding from Richardson, Brand, John Peiser and Conor West. Wronski was on fire knocking down three more three pointers. Brand hit a pair of three pointers and Richardson another three pointer to tie the Eagles 42-42 at the close of the third quarter. The Eagles pressured the Rams in the fourth quarter sending Richardson, Wilson and Peiser to the foul line. Richardson and Wilson sank two foul shots, and Peiser added a point in the clutch.  Wronski, Sarda, and Richardson fired in three more three pointers. Unfortunately, they couldn’t hold off the Eagle’s offense which took the lead halfway into the fourth quarter and won the game 66-56.

Arthur Bennington won the tip-off, and with an assist from Brand, scored a layup within the first 20 seconds of the game.  Another layup from Brand, a three-pointer from Wronski, and three foul shots from Richardson gave the Rams a 10-5 lead at the end of the first quarter. Westhill closed the gap, but New Canaan answered back and led at the half 15-14. In the second half, the Rams and Vikings exchanged leads many times. The Vikings pressured and fouled the Rams in the third and fourth quarter with Richardson, Sarda and Brand contributing foul shots. Wronski buried two more baskets and Brand contributed another layup. Strong defense and rebounding by Brand, Richardson, Bennington and Peiser kept the pressure on Westhill, sending both teams into the bonus in the fourth quarter. Richardson and Sarda each hit three pointers and Brand sank a two point jumper.  However, Westhill fought back, and the game was tied 36-36 in regulation. New Canaan turned up the heat in overtime as Wronski and Sarda fired in three point and two point jumpers, respectively. Sarda was fouled and went to the line and sank both shots in the one-in-one to help New Canaan win 45-38.

“We played hard to the end and never quit,” Rosiclair said after defeating Westhill, his high school alma mater.

With the win, New Canaan improved to 3-3 on the season.