With Darien and Greenwich now planning to hold their Sidewalk Sales on the same weekend traditionally “reserved” by New Canaan, downtown merchants hope to kick off this year’s big event one day earlier than usual, officials said. 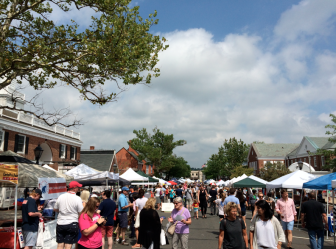 Businesses with storefronts downtown could put their discounted goods out on the sidewalks in front of them during regular hours on Friday, July 15, and the full-on and hugely popular Village Fair & Sidewalk Sale—including street closures, additional vendors and a food court in the Pop Up Park—will be held as usual on Saturday, July 16, according to Tucker Murphy, executive director of the New Canaan Chamber of Commerce, which organizes the event. 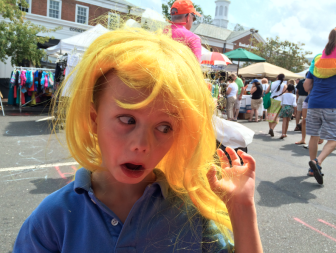 “What we’re going to propose is to have our local merchants on the sidewalk on that Friday to have a little bit of a leg up,” Murphy told the Planning & Zoning Commission at the group’s regular meeting Tuesday night, held at Town Hall. “And the other benefit to this is that, God forbid if you have some weather on either side, this would give you another day to have some movement of your inventory and some sales.” 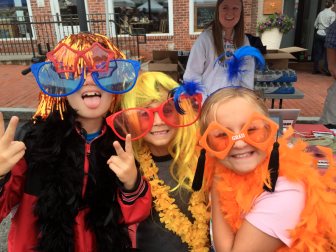 This summer’s Sidewalk Sales will mark the event’s 50th anniversary in New Canaan, Murphy said. For as long as she’s been head of the chamber (seven years in April), Murphy said, she’s met with fellow chamber directors to map out their special events and make sure there’s no awkward crossover. Darien and Greenwich traditionally have run their events on the second weekend of the year (Greenwich’s is a three-day event), but this year the Fourth of July falls on a Monday and “no one wants to have the sales on either end of the where the Fourth of July is.” 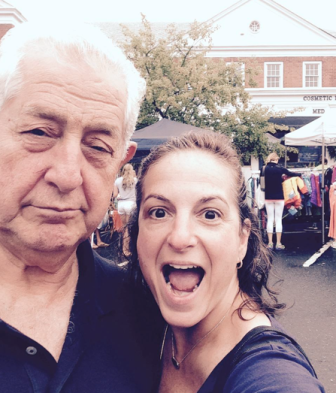 John Buzzeo and Carolyn Miller at the 2015 Sidewalk Sale in New Canaan, July 18. Selfie by Carolyn

Ultimately, the boards of those other chambers insisted that, at least this year, they move the event to the third weekend, Murphy said. She polled chamber membership about the prospect of competing with those events, or else moving to a different weekend, “and I was surprised by this, actually—the overwhelming majority said, ‘Stick with the 16th. Keep calm and carry on. We can do this. Ours is a whole different deal.’ ”

“The other towns, it’s all on the sidewalks, they don’t close the streets like we do and have all the entertainment and what have you,” Murphy said. 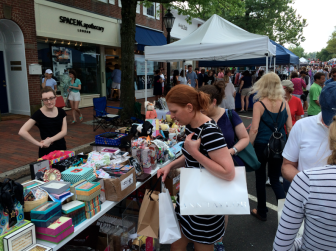 P&Z commissioner Elizabeth DeLuca asked whether the participating stores would stay open later than usual on the Friday (no) and the group’s secretary, Jean Grzelecki, asked whether the Pop Up Park would be active through both days.

Murphy said that the full Pop Up Park would not be set up on Friday because the merchants need to use South Avenue to enter and exit Elm Street for the busy set-up period on Saturday morning. However, Pop Up Park may be activated Friday in a limited way, where entertainers may set up in the space in a way that doesn’t require tables and chairs.

Murphy said she also would present the idea of the additional day to the Board of Selectmen, with an eye on making it a fixture for future Sidewalk Sales.