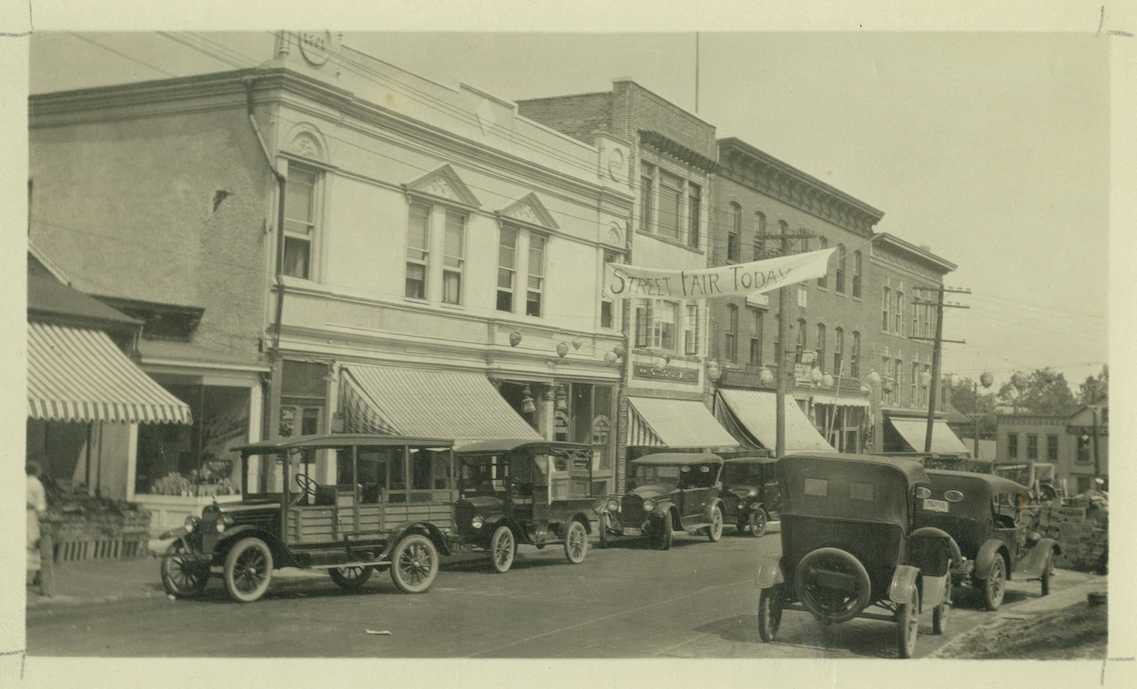 Now 80 Main Street, Nichols Opera House was built in 1890 by George Duff Nichols. The original plan for an 850 person auditorium was to be the new Town Hall, but the Town decided it did not need one. Nonetheless, the Opera House became the de facto town hall. On either side of the entrance to the opera house, Nichols also had two storefronts built. A few months before the building was even finished, the southern storefront had already been rented out to the town for $350 a month. When the building was finished in December of 1890, it was the location for the town clerk’s office, the selectman’s office, and, with three jail cells in the basement, the town jail. All of the town’s important documents were also kept in the fireproof vault that had been installed in the storefront for this purpose.  The auditorium was regularly rented out for town meetings and the rented offices were sometimes used as a courtroom.

When it first opened, the Nichols Opera House could compete with the finest in the state. The stage, the backdrops, and the dressing rooms were top quality. There was even a banquet hall in the basement. It was also the first building to be electrified in New Canaan. The first show held there,”Annette, the Dancing Girl”, opened on December 23, 1890.  Shows were also held on the following day, Christmas Eve, with a banquet starting at 12:30 am. In order to accommodate the out of towners, Nichols arranged for an extra train to leave New Canaan at 11:30 pm. However this sort of event did not last long. It quickly became apparent that a small town such as New Canaan could not support an opera house.  Within a year, the opera house was mostly hosting plays put on by local companies, and local events. No operas were actually ever performed here. Unsurprisingly, the underground banquet hall did not prove to be successful, so Nichols converted the space into a corset and underwear factory. The electric lights also did not last long. After two months, Nichols had the building converted to gas light fixtures. It was most likely too expensive to run the generator needed to power the building.

Business went on as usual until 1902, when George Nichols attempted to kill his wife’s lover, Fred Clark. Clark was a printer from out of town who was renting out space in the back of the opera house to print his paper the Fairfield County Republican. Clark was living with the Nichols and this is where the affair seems to have begun. By this point Nichols had accumulated a lot of debt and his excessive drinking was well known enough in town that he was singled out in a sermon given at the Baptist Church a year before.  This all came to a head on January 8 1902, when Nichols and his wife had a fight and Nichols kicked everyone out of the house. Nichols was gone from the town for most of the next day, but came back at night drunk and determined. He armed both himself and his 17 year old son with revolvers and went down to the Birdsall Inn to confront Clark.  They found Clark in the billiards room where Nichols fired at him point blank. The revolver misfired and failed to discharge. Undeterred, Nichols tackled Clark to the ground and beat Clark with the gun until Nichols was restrained by bystanders. At this point Nichols shouted at his son to shoot Clark. Following his orders, Nichols’ son shot Clark in the head. Fred Clark, being one of the luckiest people to ever have set foot in New Canaan, survived. The bullet struck him in the head, but flattened against his skull. The son was quickly subdued and both Nichols men were thrown in the jail cells under the opera house.  Before he could stand trial for attempted murder, George Nichols died of a heart attack. The charges against his son were later dropped.

The opera house was sold to cover George Nichols’ various debts and, in 1904, it became New Canaan’s first movie theater. On February 2 1904, “The Great Train Robbery” was the first movie to be shown there. In 1910, the various town offices moved across the street to our current Town Hall. Movies were shown in the opera house until it was closed in 1935. Two years later the Rosen brothers bought the property and tore down the old opera house. They then built the Rosen Bros. grocery store that remained in business until 1986.

New Canaan Now & Then” is presented in partnership with the New Canaan Museum & Historical Society.