Looking back over the annals of New Canaan’s sports history, there have been many instances of siblings who became star athletes. Notable among those are Len and Dennis Paglialunga, Lem and Bea James, Lee and Robert Jones, Peil and Bob Pennington, Kurt and Rick Horton…the list is actually quite extensive. One name that belongs at the top of this list is Overbeck. 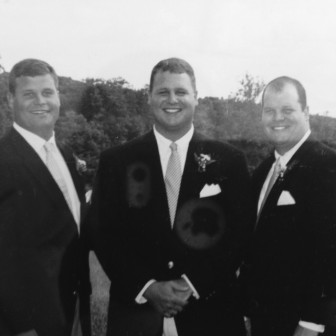 Brian, Chris and Scott Overbeck were three of New Canaan’s greatest three-sport athletes, writing a legacy that stretched from the mid-1980’s to the early 1990’s with each brother starring in football, basketball and lacrosse. The offspring of former New Canaan hoops star Don Overbeck and legendary former Rams girls tennis coach Gail Overbeck, the first to arrive on the scene was Brian, a 1987 grad of NCHS. The eldest Overbeck brother earned seven varsity letters overall and was a member of Lou Marinelli’s first FCIAC finalist team in 1986, receiving recognition as one of the league’s top punters.

Overbeck played basketball for Rams head coach Don Usher for two seasons, leading the Rams to a state semifinal appearance while serving as team captain in his senior year.

Overbeck enjoyed the most team success playing lacrosse for head coach Howard Benedict where he was a member of a senior class who won one FCIAC and three consecutive state championships. In his senior year, the Rams finished with a 19-1 record.

After graduating from NCHS, Overbeck attended Washington & Lee University, earning two varsity letters in lacrosse. He graduated in 1991 with a major in Communications and a minor in History.

After working for a division of Fleet Bank for more than three years, Overbeck became involved in the golf business, working as a General Manager for Golf Galaxy for nearly five years, and then for Nike Golf for almost a decade. He is presently a territory sales manager for TaylorMade-Adidas Golf on Long Island, where he currently resides, having recently completed rebuilding his south shore home over the past two and half years from devastation caused by Superstorm Sandy.

Middle brother Chris Overbeck spent three years playing varsity football for the Rams under Lou Marinelli. During his two years as the Rams’ starting QB, the team went 15-5. In Chris’s senior year he was honored as an Offensive All-FCIAC East award and was named first team All-State from the Hartford Courant.

Overbeck also played for three years on the NCHS varsity basketball team under coach Don Usher. He was named to the all FCIAC team his senior year, on an underdog team that lost to powerhouse program Danbury High School by two points in the 1989 Class LL championship. In that game Chris scored a career-high 29 points.

Chris played varsity lacrosse for three years under coach Howard Benedict and as a sophomore he joined Brian on that 1987 FCIAC and state championship team. As a starter in his junior year Chris scored the winning goal in the 1988 FCIAC championship and was honored as an All-State player his senior year.

After graduating from New Canaan High in 1989, Chris was awarded a partial scholarship to attend the University of Virginia and play lacrosse. During his time at UVA the lacrosse teams went a combined 36 – 19. The team made the ACC playoffs in three of his four years there.

Chris currently works in NYC as a Managing Director at Jefferies LLC. He lives in Garden City, New York with his wife, Kelly, and their three children, Miller(15), Holden (13) and Mabel (9). He has been a youth lacrosse coach in the Garden City community.

Youngest brother Scott was—as a sophomore—the sixth man on that legendary 1989 basketball team, eventually becoming a team co-captain as a senior. He also played varsity lacrosse for the Rams as a freshman, sophomore and senior, missing his junior campaign with a knee injury.

But it was football where Scott Overbeck achieved his highest ceiling, as the 1991 NCHS grad was a two-way starter for Lou Marinelli from his sophomore through senior year, starring at both fullback and defensive line.

Things started off great for Scott at New Canaan High as his freshman team coached by Dave Campbell and Hans Schneider went undefeated. In his sophomore year New Canaan qualified for the FCIAC’s but lost in the semifinal to Greenwich. A highlight of Scott’s senior year was scoring the winning touchdown in the final play of the Trumbull game. He was named 1990’s Connecticut Player of the Year by the New Haven Register, gaining 1,019 yards and becoming the first Ram to eclipse the century mark since Dennis Paglialunga did it 17 years earlier.

Scott was awarded a full five-year football scholarship to play at the University of North Carolina under Coach Mack Brown. Overbeck redshirted his freshman year and played as an offensive guard as a backup his second and third year. He earned the starting job as right offensive guard during spring football of his third year, but would miss his entire fourth season due to a broken leg that occurred one week before the start of the season. He was able to make it back his senior season and started his final game in the CARQUEST Bowl against SEC West Champion Arkansas. While at UNC, Overbeck played on teams that were invited to four Bowl games.

Scott currently works in New York City as a Managing Director at Instinet LLC. He lives in Darien with his wife and fellow NCHS Class of ’91 alum Jenna Stewart and his five children, Grayden (13), Rhys (11), Merryn (9) Ellery (8) and Tierney (5). Scott is still involved with sports as a youth football, basketball and lacrosse coach. He is also on the board of the Darien Junior Football League (DJFL).

The New Canaan Old Timers celebration runs from 10am to 3pm on Sunday September 20th, and includes a continental breakfast and lunch. The cost is $50 for adults, $20 for students. Proceeds from the event go toward the Vin Iovino Scholarship, named for the former NCHS athletic director and presented to selected senior athletes at the annual sports picnic and award ceremony held at the end of every school year.