Coming off a season that included a spectacular upset, 3-0 victory over No. 3 seed Platt Tech in the opening round of the state tournament, the program’s first win in the CIAC tourney since 2011, the Rams boys varsity soccer team is eager to get back on the pitch in 2015 and fight to go even further.

“Griffin, our goalkeeper, has been a standout the last couple years, which is great. Brett’s basically been ever-present on this team since he was a freshman, so he’s been there, seen it and done it now for the last three years—certainly leads off the field as well,” Sutherland said. “And Jack’s been there since sophomore year like Griffin. They all know what the program’s about. They’re all good players, great captains and leaders, and I’m pretty confident that the team will be benefit because of them. Every success that the team has this season will come through them leading this team, on and off the field.” 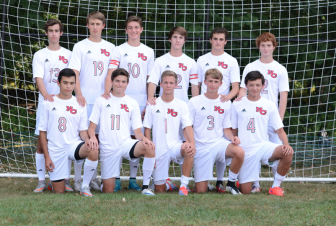 Seniors on the NCHS Rams varsity soccer team of 2015. Photo by Christine Betack

In addition to the three captains, returning Rams include midfielders Hugo Potter and William Tingley, along with defensemen Jono Betack and Robbie Fusek.

But while the Rams are projected to see 12 to 13 seniors return, the group is not a typical veteran squad, with just eight players who have prior varsity experience. That means team chemistry will be essential to the Rams getting off to a good start. 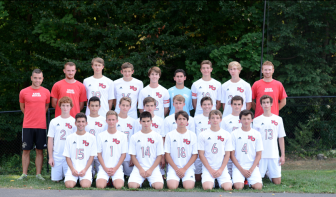 “They’re pretty close-knit, which is a benefit for us,” he said. “On the field, we’re going to be consistent across the board this year. It’s going to be all about making ourselves difficult to beat. And team cohesion, team spirit, all of that’s going to go a long way in determining how we do this year. They’re fantastic kids to work with.” 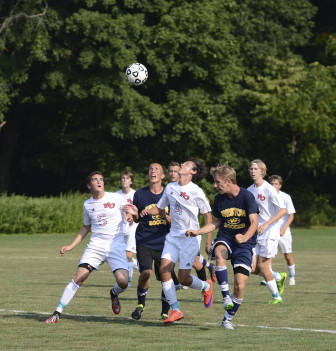 “The brotherhood of the team is outstanding,” Paterson told NewCanaanite.com. “We practice together five, six days a week and when you spend that much time with a group of guys you end up becoming really close. like a single collective unit. And I just love being a part of that type of thing.”

Capone added: “Everyone works hard for each other. It’s a hardworking bunch, especially on defense. We all play for each other and whether or not our touch is on, or the shots are going in or not, everyone just works hard the whole game.” 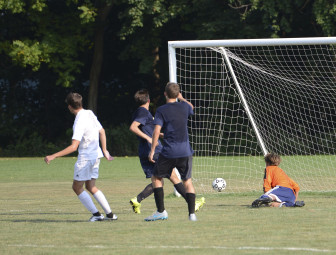 NCHS Rams varsity soccer team senior striker Chase Ashley had a “hat trick” in the squad’s 4-1 preseason victory over Weston. Here he is scoring a goal. Photo by Christine Betack

And it will require hard work to climb what Sutherland is calling the team’s “hardest year yet in the FCIAC.”

“Overall, every single game we play will be incredibly, incredibly tough,” Sutherland said. “There are no walkovers in the FCIAC; there won’t be any easy games for us; and we’re going to have to battle and fight to really get points this year within the whole league.” 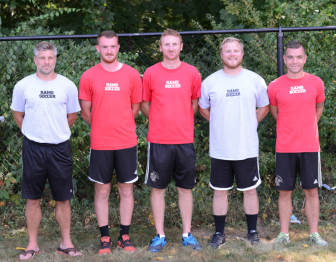 Having everything in front of him, Paterson is confident that his teammates can build off of last season’s promising finish.

“This year we are going all out, balls to the wall,” he said. “Last year we beat the #3 seed in the state tournament and we’re going to try to build on that success. We ended up losing to Guilford in double OT, which was heartbreaking—54 seconds left until PK’s.” 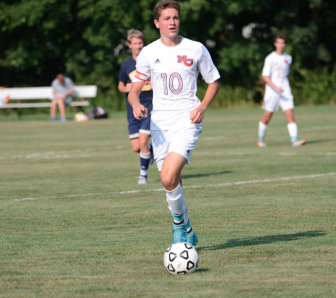 The energy and enthusiasm from the senior keeper is contagious, and should bode well in beginning this program’s attempt to get back to postseason play in 2015.

The regular season gets underway on Friday, Sept. 11 at Stamford with the home schedule commencing the following Tuesday, Sept. 15 versus Brien McMahon at Conner Field. Here’s the complete schedule: