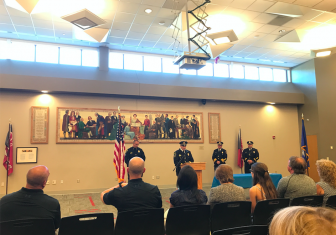 NCPD honored 11 members of the police force at an awards ceremony Tuesday night. Pictured is Capt. Andrew Walsh with Sgt. Brian Mitchell, who received the Meritorious Police Duty Award.Police Chief Leon Krolikowski presented the Lt. Stephen W Wood Officer of the Year Award to Officer Thomas Callinan. Krolikowski cited Callinan’s “self-initiative, service to the New Canaan Community, integrity and selfless service to our Department and Town” in presenting the award. Callinan had the highest number of self-initiated motor stops as well as a high number of call involvements, the chief said.

Krolikowski presented the Meritorious Duty Award to Officer Kelly Coughlin, and the Unit Citation Award to Lt. Marc DeFelice, Sgt. Aaron LaTourette and Sgt. Kevin Casey, and Officers Scott Hamburg, Mike O’Sullivan, and Will Sheehan in connection with a burglary on March 25.

Coughlin had been on duty and was assisted by the rest of the unit to apprehend a suspect and solved several burglaries as a result, according to the chief.

Coughlin earned the Chief’s Award of Physical Fitness, an award given “to an officer achieving the highest score (761 out of 800) for the previous year.

“The test measures the officer’s fitness in the following categories: one and one half mile run, sit and reach, bench press, agility, and body fat,” according to the department.

Capt. Andrew Walsh presented the Meritorious Police Duty Award to Sgt. Joseph Farenga for his off-duty actions on June 24, 2016 when the sergeant recognized activity “he knew to be indicative of identity theft and credit card fraud.” When the suspect fled the scene, Farenga pursued on foot though he was off-duty and unarmed. Walsh lauded Farenga’s actions, saying he “went above and beyond, while in an off-duty and unarmed status.”

“He showed a higher interest in the greater good, over his own well-being, to apprehend these suspects,” Wash said, adding that Farenga’s actions resulted in “two felony arrests for multiple charges.”

Walsh also presented the Meritorious Police Duty Award to Sgt. Brian Mitchell for his service in planning the Civilian Police Academy, where he went “above and beyond the normal scope of his daily assignments” to ensure its success. This was a nine-week interactive program covering many aspects of police service, including “training, recruitment, and police accreditation, internal affairs use of force, drugs & alcohol, youth interaction, firearms, investigations, domestic violence, traffic enforcement, and the criminal justice system.” The Civilian Police Academy “brought a good light to the New Canaan Police Department and showed the students how dedicated our officers are to community service.”

In closing regards, Krolikowski thanked the officers for their service to the community.

“They did what was right as they selflessly protected and served our town,” he said. “There’s no doubt that these officers make our department great, and we owe them each a thank you for what they do each and every day.”