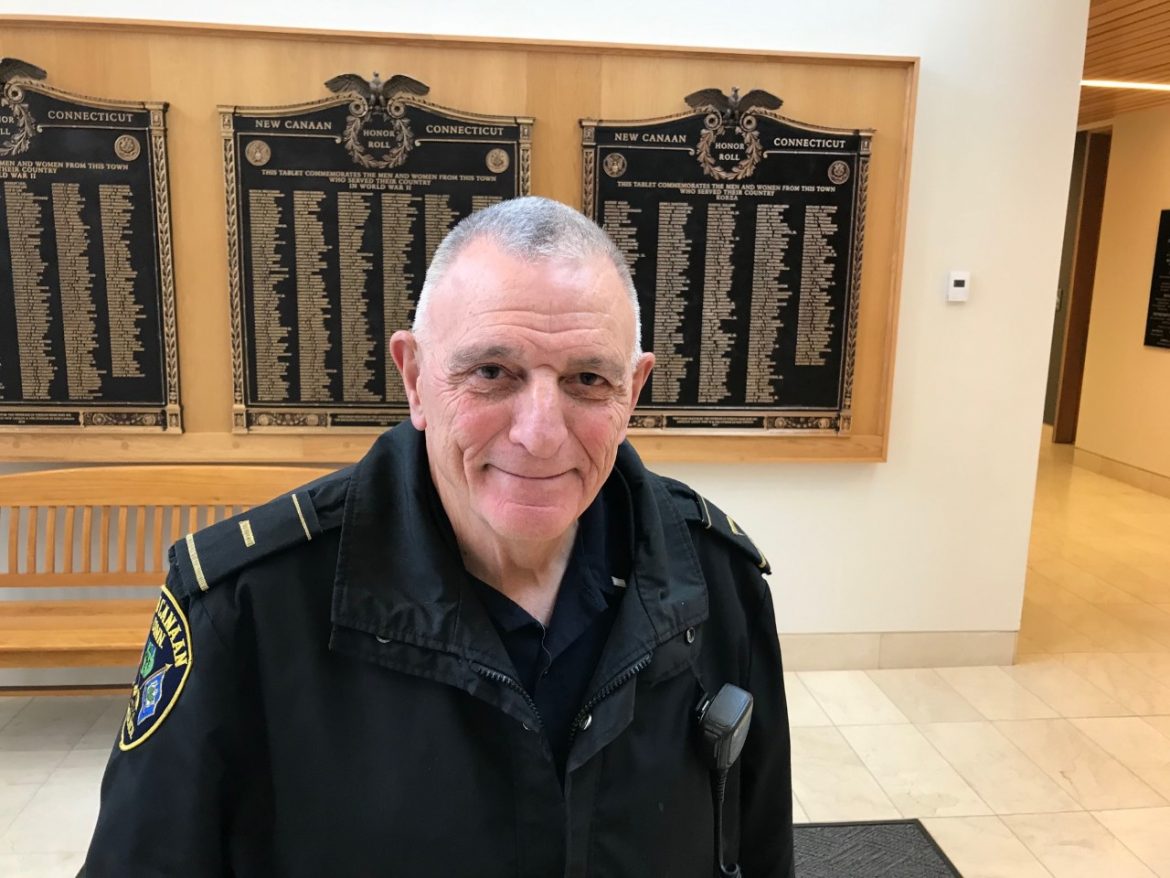 Lt. Bill Ferri is retiring from the New Canaan Police Department after 52 years and four months in the job. His last day is Feb. 29, 2020. Credit: Michael Dinan

Bill Ferri was drafted by the U.S. Army in 1965, one year after graduating from Stamford High School.

He would serve as a specialist in the central highlands of Vietnam for one year starting in 1966.

“I didn’t go to college,” the New Canaan resident recalled Thursday, standing by the veteran memorial plaques in the north lobby of Town Hall. “I didn’t want to go to college. They took me right off the street.”

Months after returning from the war, he joined the New Canaan Police Department, and he’s worked there ever since—for 52 years and four months—in a professional career that’s seen him protect and serve generations of locals.

That career soon will close, as Lt. Bill Ferri prepares to retire at month’s end, marking the end of an era for the Police Department as well as the wider community.

Asked what comes to mind on reflecting on the Police Department, Ferri said, “Met a lot of nice police officers. We were a tight group all through the years. It’s a great job.”

His service to the department, town and nation “are remarkable in every respect,” Police Chief Leon Krolikowski said.

“His service to our great country as a proud Army Vietnam Veteran must not be overlooked,” Krolikowski said in an email. “Most certainly his service model will be hard to duplicate and his shoes will be hard to fill. When you see him, please thank him for his service, and wish him well in his well-deserved retirement.”

Asked what he has planned, Ferri said with a smile, “Believe it or not, I’m just going to help preach at the Catholic church.”

Asked how he would describe changes in the town during the course of his five decades as a police officer, Ferri said that New Canaan sees more different types of crimes.

He added, “It was all drugs in the ‘60s. There were burglaries, but the majority was drug problems … Now it’s different. You have a lot of things happening that shouldn’t be happening.”

Asked what experiences or exchanges he’ll remember most about his career with the police, Ferri said, “There were so many things, especially in the ‘60s and ‘70s, that happened. I helped a lot of kids, believe it or not, in the ‘70s, who were getting involved with drugs. And I was a guy that came from Vietnam for the job here in ’67 and I helped a lot of people. I helped a lot of the teenagers in the schools, and they remember me, helping them not get arrested by trying to help them out. If they screwed up a second or third time, they got arrested. And a lot of people still remember me when they see me. ‘Oh you gave us a break with the beer.’ I just try to be honest and do a good job. I was a kid, too.”

Ferri is retiring as a widely anticipated renovation of the agency’s South Avenue headquarters nears. The department also got an injection of new blood recently, with four new officers joining the force.

Asked what he’d advise any rookie officer coming out of the academy, Ferri said, “Listen to your field trainer. Try and get yourself involved. Once you know what you’re doing, get involved so you are not making mistakes. Everything will be smooth. Be nice to the people. Treat the people like you want to be treated and it will go smoothly.”

22 thoughts on “After 52 Years on the Job, New Canaan Police Lt. Bill Ferri To Retire at Month’s End”