In New Canaan, soccer has emerged as a staple of many childhoods, whether players take to the pitch in a rec jersey, for a travel team, with the high school Rams or in an adult league. 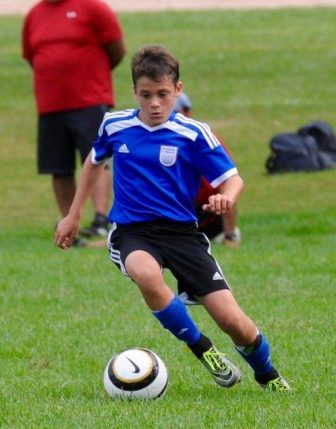 And among the hundreds of New Canaanites who suit up across every level, one Saxe Middle School student is beginning to stand out in a unique way.

Seventh-grader Noah Radecki has emerged as one of the town’s top players, recently attending the U.S. Soccer National Team’s Futures Camp, a highly selective training program hosted by national team coaches. Notable players at the camp include Jermaine Jones, who is on the U.S. Men’s National Team as well as the L.A. Galaxy, and Cobi Jones, who has the most appearances for the U.S. National Team in its history.

After receiving the invitation to the prestigious camp, Radecki said he was speechless. 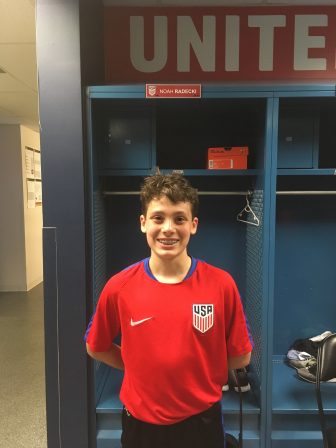 “I had no words,” Radecki told NewCanaanite.com. “I look at a piece of paper and I start reading the first paragraph and it’s like Oh, from US Soccer’ and I was like Oh, what can this be?’ and as I got into it, I saw that I was invited to a camp. I’ve worked for it my whole life.”

The camp fills a roster with 64 players from around the U.S., taking 32 players from both 02 and 03 birth years.

Radecki described the camp—held in Carson, Calif.—as “very professional.” Everything was provided, including his own locker with a name tag, he said.

“Going in there, they gave you all your clothes, they gave you everything you needed to wear, a hotel room, a roommate, you had to be always on time, it was very intense… It was usually two training sessions a day for an hour and 15 minutes. They’d already have all the cones set up so you just go from drill to drill. Water on the field, trainers, everything was all there, so it was very focused.” 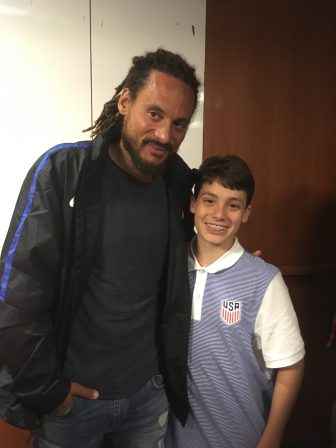 It’s been a long journey for Radecki, even though he’s still young.

He began playing at age four through New Canaan’s youth recreational soccer program because it was something his older brothers had done before him.

“My first game, I scored 12 goals, so I think I kind of was like, ‘Hey, I’m not that bad at this,’ and so I think that got me into it,” he said. “When I started watching soccer, my love for the game grew, and I really progressed quickly and so it really made me want to play soccer even more.”

He said that the sport is appealing to him because the game never stops. Everyone is constantly moving and must learn to think and act quickly.

“It’s a very challenging game mentally, so you always have to be ready, but I also just enjoy the way you can move with the ball and the flow,” Radecki said.

Although Radecki is only finishing up seventh grade, he plays soccer year round for Norwalk-based Beachside, a team that practices three times a week year-round and has games on the weekends. Over the winter, the group goes to Sherwood Island each weekend for more than one hour of exercise. 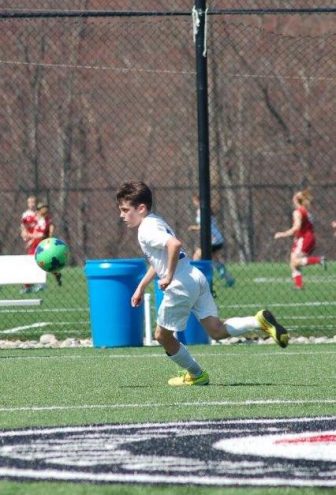 Radecki said that for other players trying to improve their game, practicing and managing your time are imperative.

“Practice every day,” he said.

“Always make sure to practice. Do what your coach tells you, but the most important thing, don’t forget to keep a balance. Make sure to balance your family, your academics, your soccer all together.”