A third Republican on Monday threw her hat into the ring in what has become a highly competitive race to secure party backing for the town’s highest elected position. 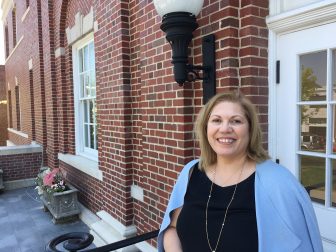 Republican Cristina A. Ross is seeking her party’s backing for the office of first selectman at the July 18 caucus. Credit: Michael Dinan

Cristina A. Ross, a New Canaan resident for 26 years, professional architect and Town Council member for two years who had spent 10 years on the Parks & Recreation Commission, announced her candidacy for first selectman during a press event at Town Hall.

Saying her priority would be “strengthening the New Canaan community by establishing a framework for the delivery of services with full accountability and transparency as a method of doing business,” Ross said in a prepared statement that she would focus on boosting property sales by decking the parking lots at the Lumberyard and Talmadge Hill, controlling tax increases, bringing in natural gas and improving communications within town government.

Asked about the last point specifically, Ross told NewCanaanite.com: “There is a lack of communication between the Board of Selectmen and town departments, whether that is the Town Council or P&Z and that has been voiced on different occasions by different people, that we are not included in some of the goals set and we hear about it when the time comes to vote on it and the decision is already made. Not being able to raise a voice and a concern and suggest alternatives is a detriment to the function of being a public official.” 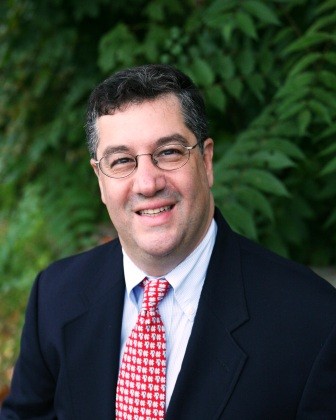 She joins two fellow Republicans in seeking party backing at the July 18 caucus: First Selectman Rob Mallozzi announced in March that he will seek a fourth term in the office, and fellow town councilman Kevin Moyhihan on May 30 announced that he was running for first selectman.

Asked for her reasons for running in a year when two Republicans already have announced their intentions, Ross said: “I have been considering it for some time and Kevin Moynihan and I talked about running and we both felt strongly about it and we both felt we should make the competition that much stronger.” 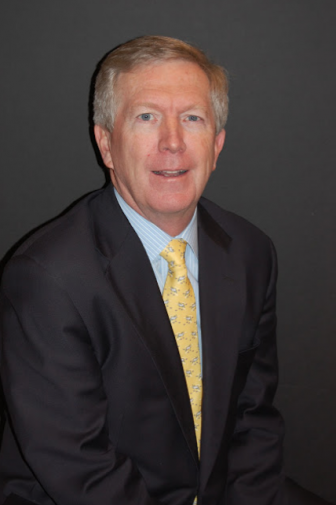 When one local news reporter present said that she and Moynihan could split between them voters who would like to see a new first selectman, Ross answered: “Or maybe he [Mallozzi] will split the vote. We will see.”

Moynihan declined to comment on Ross’s entrance in the race when reached by New Canaanite.

Mallozzi said: “The community deserves a thoughtful conversation on the issues and the entry of another candidate into the contest should provide more of an opportunity for such.”

Democrat Kit Devereaux, a former Town Council and Board of Finance member who served on the Charter Revision Commission and now sits on the Park & Recreation Commission, is seeking her party’s backing at the Dems’ July 18 caucus.

Asked for her thoughts on yet another candidate vying for the seat of first selectman, Devereaux said: “This is definitely going to be one of the most interesting elections in my memory. Every position is contested and this ensures that the voters will have a great opportunity to hear about all of the issues. I’m looking forward to it.”

Two other Republicans—incumbent Selectman Nick Williams and Town Council member Christa Kenin—also have announced that they’re seeking a seat on the Board of Selectmen, as selectmen.

Those who fail to win at the caucus may seek to force a primary in September to gain party backing.

Ross, mom to three daughters who came up through New Canaan Public Schools, worked prior to moving to town in the real estate and facilities division of JP Morgan—a job, she said in her prepared statement, that focused on “procedures, compliance, construction, contract negotiations, fast tracking, budgeting and financial analysis.”

She indicated in her remarks that New Canaan lacks a workable long-range plan for growth.

“As the first initiative, we must objectively evaluate how economic variability affects our town’s institutions and agencies that provide services to us, which will not only make their functionality more efficient but would also have a greater impact on the community as a whole,” Ross said in her statement.

She listed among her priorities maintaining the high-performing public schools and “making certain that our town leads by example in financial accountability and transparency.”

Ross had been the most vocal town councilman during a widely discussed public hearing in March with the town treasurer that included claims—cited later by the Audit Committee—about problems in financial controls, and preceded the retirement of New Canaan’s finance director.

The Audit Committee subsequently signed off on an outstanding audit for the town. Asked whether she was referring in her comments to the finance department specifically, Ross said “No.”

“That was one of many issues that had come up, like the Waveny roof, the Vine Cottage construction as a whole, prioritizing what projects whether it was the Locust parking lot versus anything else,” she said. “The series of decisions that are being made can be improved upon.”