Touting their work in forging stronger bonds between the town and Board of Education, addressing long-ignored infrastructure needs and nurturing a responsive and courteous attitude among municipal employees, First Selectman Rob Mallozzi and Selectman Nick Williams announced that they’ll seek fourth terms on the Board of Selectmen. 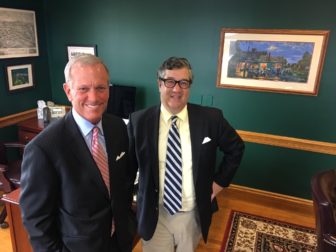 During a meeting this week with the local press corps, the Republican duo pointed to complementary backgrounds as volunteers in public safety and education to underscore their work on behalf of the community, and said they’ve enjoyed serving alongside Democratic counterpart Beth Jones.

“We have had a very good relationship together, we are really proud of where the town has been and where it’s going, and we feel that we best represent the leadership component that is important to this community,” Mallozzi said during an interview at Town Hall.

Calling Mallozzi one of his best friends, Williams described the Board of Selectmen as “cohesive” as he can remember.

“We work together, we get along great and it’s really been a joy to be a part of it,” Williams said.

The pair also said they looked forward to working with Democrat Kit Devereaux, who has announced her intention to run for a seat on the Board of Selectmen. Asked about the prospect of petitioning candidate Michael Nowacki again running for first selectman—Nowacki in an email confirmed his intentions to do so with NewCanaanite.com—Mallozzi lamented what he described as unwanted and negative changes in the tone of conversation (more on that below).

Complimenting Superintendent of Schools Dr. Bryan Luizzi and the Board of Ed, Mallozzi said the relationship between the district and Town Hall is in “an unbelievably better place now” compared to before he took office.

“Through efforts on our part, through efforts on the Board of Ed’s part and mostly through efforts of Dr. Luizzi and his staff, we are in a real good place,” Mallozzi said. “We are talking synergies to a greater degree, we are extremely respectful of each other’s missions and constraints in terms of state statutes and all that.”

The relationship between the two groups in the past had been “nonexistent,” the first selectman said, and the school board had been seeing “a lot of turnover.”

“There were some financial issues that were contentious between the town and the Board of Ed in terms of funding of insurance and some educational needs,” he said. “That’s all been worked out. We have come a long way.”

Part of the reason for the improvement, according to Mallozzi, is Williams, a former chairman of the Board of Ed.

“What’s going on here in terms of his particular strengths on the legal end of things and as a former chairman of the Board of Ed, and you could say the same about me with ties to emergency services for the town and emergency management and the fire, police and [New Canaan Volunteer Ambulance Corps] component that I have a special affinity for and a deep understanding for,” Mallozzi said. “And I look at those two things as really quite complementary in terms of the vital services that a town provides, education and public safety. I don’t know that you can find two stronger gentlemen or ladies in the highest office of the town with the competency that we have.”

Williams said “it’s critical” for New Canaan to have a school system that distinguishes itself statewide as well as nationwide.

“When you ask people why they move to New Canaan—education and the downtown. Those are the two things. We are sitting in a brand new town building, in a relatively new Town Hall and that is not a project that we started. But we were able to finish it. The desire to have a new Town Hall started 25 years ago because the old one was simply falling down. And I’m proud that this Board of Selectmen was able to see that through to the finish.”

Williams and Mallozzi also noted that the town is seeing a lower compensation claim rate among municipal departments such as fire and police.

“These are things that save the town money,” Williams said. “It’s really communication, education with respect to safety issues and things like that.”

The pair also referred to New Canaan’s legislative body, the Town Council, in describing the Board of Selectmen by contrast as free from “drama.”

“I swear I still smile because I love being first selectman of this town,” Mallozzi said. “It’s got its ups and downs. But what you won’t see with Nick and I and with Beth—and Nick and I and Kit, if she joins us in one capacity or another—is you are going to see a group that has the best interests of the town first. It doesn’t put personal agendas first, and you have seen a lot of that in a lot of other bodies in town. But there is none of that, it doesn’t go on with the Board of Selectmen. It starts at the top. I can’t control and Nick can’t control and Beth can’t control and [Administrative Officer] Tom Stadler can’t control how the other bodies function.”

The selectmen “could easily hit a little switch and make drama out of everything that comes our way,” Mallozzi said, but “I do not believe you govern for drama.”

“There are others that love to dramatize,” he said.

Mallozzi added: “The town should not feel we are on the edge of personal feeling and personal agendas to the point where it might appear to be in other bodies, but it doesn’t work that way with the Board of Selectmen or Board of Finance.”

Asked to pinpoint the two major challenges facing New Canaan, Mallozzi said “running a town in the absence of state economics being favorable” and protecting the town’s infrastructure.

Noting that it was on his own watch as first selectman that New Canaan created a “buildings superintendent” to oversee 40-plus publicly owned structures (modeled after the district’s facilities director position), Mallozzi said: “That component of our town budget that needs to go to town facilities will only be growing, and that’s a difficult thing.”

Two years ago, in a municipal election that saw strong voter turnout, Mallozzi earned more than 10 times the votes as Nowacki, though the summer of 2015 itself was unusual in that the first selectman declined to recognize Nowacki’s candidacy and opted not to participate in a debate.

Asked for his thoughts on the prospect of Nowacki running again, Mallozzi said: “We had a desire last election to have a conversation with the community and we really couldn’t because we had a malcontent narcissist—and you can quote me—who inserted himself in the town debate and I think it took away from the town. God bless Kit for stepping up and wanting to run, because we all deserve to have a conversation about our town. I am really worried if this guy gets the signatures required to get on the ballot that we will be in a very similar situation to last [election], and that is where we can’t have that open and honest dialogue because the conversation will be hijacked because of the things that are important to him—which may not bear any fruit for the Ethics [Board] or the public at large—but the conversation, the tenor of that conversation changes. And yes I’m disappointed, because she is putting herself out there, Kit, Nick and I are, for the benefit of the community, and we have got another gentleman that I believe is putting himself out there, I believe, for his own narcissistic and certainly personal feelings, way above the community. He might not see it that way, but that is the way I see it. And I am not looking forward to that.”