Nearly 30 percent of eligible voters had cast ballots in local elections when polls closed at 8 p.m. Tuesday, following a day that saw candidates for offices including Town Council greet constituents at the middle and high schools through a clear, warm day and chilly evening.

And here’s a table that NewCanaanite.com will update regularly, showing voter turnout in New Canaan hour-by-hour:

Karl stood outside Saxe Middle School late Tuesday morning, and when asked how he felt about how things were going, said: “I feel great. The weather is great. Lots of friends and family supporters out. Everything is going well.”

Other candidates we saw answered the same question: 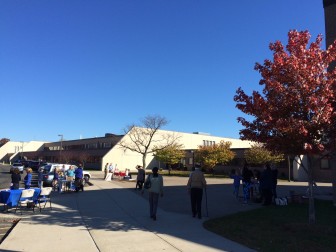 In addition to campaign signs and tables, and Girl Scouts selling cookies, each school/voting place had a table set up by the group Citizens Supporting Saxe.

Its founder, New Canaan’s Michelle Orr, told NewCanaanite that she’s seen a “good turnout of parents” at the polls.

“We are not endorsing any candidates. We are letting the public know which candidates have publicly supported the expansion, and which have not.”

Constituents who would like to see real-time updates on voter turnout may follow these instructions, provided by the office of the Registrar of Voters: