New Canaan will mark the twentieth anniversary of the Sept. 11, 2001 terrorist attacks with a ceremony to be held Saturday morning on the front lawn of Town Hall. 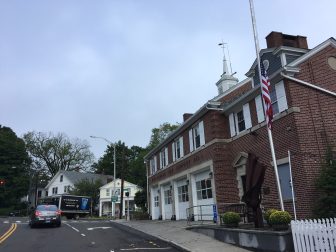 The flag at the New Canaan Firehouse flying at half-mast above the 9/11 memorial on Sept. 11, 2018. Credit: Michael Dinan

Attendees are asked to be in place by 9:55 a.m. for the ceremony, which usually starts at 9:59 a.m., the precise time that the South Tower fell 20 years ago.

Asked about the town’s plans to commemorate the day, First Selectman Kevin Moynihan noted that among the 2,977 who died on 9/11 were three New Canaan men at the World Trade Center.

On the anniversary of the attacks, the town will “remember and mourn the loss of Joe, Eamon and Brad,” he said.

Attended by residents and municipal workers as well as many representatives of the New Canaan Fire Department, New Canaan Police Department and New Canaan Emergency Medical Services, the annual ceremony is held opposite the firehouse. There, a memorial stands facing Main Street, a 16-foot section from the floor of Tower One on the 99th floor, just above the impact point of United flight 175.

In years past, the ceremony has included the singing of “God Bless America,” prayer led by a local pastor and a moment of silence for Coppo, Fetchet and McEneaney. Fire officials also ring a bell 5-5-5—a pattern used during the telegraph era to signal that a firefighter has died in the line of duty— and a wreath was laid at the firehouse memorial.