While New Canaan may not be constituted to meet a rigorous state threshold that would forever protect the town from loophole-happy developers, it might be able to stave off unwanted development at least for a few years while alternatives are figured out, officials said Tuesday.

A proposal that would double the number of affordable housing units at Mill Pond may trigger a three-year exemption from the Affordable Housing Appeals Act. Under that law, in towns where less than 10 percent of the housing qualifies as “affordable” by the state’s definition (see below—New Canaan’s is at about 2.4 percent), developers may bypass local planning decisions by designating a percentage of units within proposed new structures as affordable.

Town Planner Steve Kleppin said at the Board of Finance meeting that it’s not realistic for New Canaan to get all the way to 10 percent.

“The total number is just not there,” Kleppin said at the meeting, held in the Sturgess Room at the New Canaan Nature Center’s Visitors Center.

“We have been luckier than a lot of our surrounding communities in terms of these kinds of applications,” he continued. “Darien has gotten pummeled, Ridgefield right now is getting it. Wilton has one on their agenda Monday night. And I’ll give you an example, I talked with the Wilton planner the other day, they have a 1-acre site and someone is proposing 20 units on the 1-acre site, which is in a typical 1-acre residential zone similar to New Canaan.”

New Canaan recently has seen at least one developer invoke the specter of the affordable housing law—sometimes called “8-30g” in reference to its Connecticut General Statutes number—in the contentious, litigious Jelliff Mill Falls project (well underway). (In that instance, the town reached a settlement whereby the developer put some money into an affordable housing fund, and proceeded.) 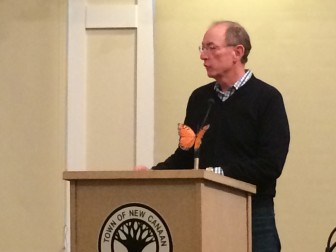 Chuck Berman of the New Canaan Housing Authority, at the June 10, 2014 meeting of the Board of Finance, held at the New Canaan Nature Center. Credit: Michael Dinan

Now officials are hoping that a proposed project at Mill Pond will protect the town from (abuses of) the Affordable Housing Appeals Act. The plan itself calls for about 80 units to go in at Millport Apartments where 18 now stand, according to Chuck Berman, chairman of the Housing Authority, which oversees the units. The abutting Mill Apartments in recent years were rebuilt with a higher density (12 units became 40). The project would involve razing houses that the authority recently purchased—what many townies may remember as the Schmid family’s home—and expanding down the hill from the medical building up on East Avenue.

Though the 80 units themselves would help New Canaan approach just 3.5 percent or so, there’s a provision (a complicated provision) in the state law that could yield a three-year moratorium of the Affordable Housing Appeals Act. Under the provision, types of housing are assigned a certain number of points based on variables such as how much they cost (in mortgage payments or rent) and who they serve (seniors or families). If a town amasses enough “housing unit equivalent” points, it can earn a three-year exemption.

The finance board voted unanimously to make $500,000 available to the Housing Authority to plan for the Millport Apartments rebuild. That money, collected though a 1 percent add-on fee for some building permit applications—is held in trust for the express purpose of boosting New Canaan’s affordable housing stock.

According to the most recent data from the state Department of Economic and Community Development, 2.42 percent of New Canaan’s housing stock is “affordable” under the state’s definition.

Here’s how New Canaan stacks up with some other municipalities of Fairfield County:

Housing is defined by the state as “affordable” if its cost—in the form of rent or mortgage payments—comes to less than 30 percent of the region’s median family income. New Canaan (and the rest of lower Fairfield County) falls in what HUD calls the “Norwalk-Stamford Metropolitan Area,” whose estimated median family income is $115,300 for a 4-person family.

New Canaan’s current 183 affordable units include 140 government-assisted (mostly between Millport and Canaan Parish, up at the top of Lakeview by 123), 31 deed restricted and 10 tenant rental assistance, as well as two CHFA mortgages.