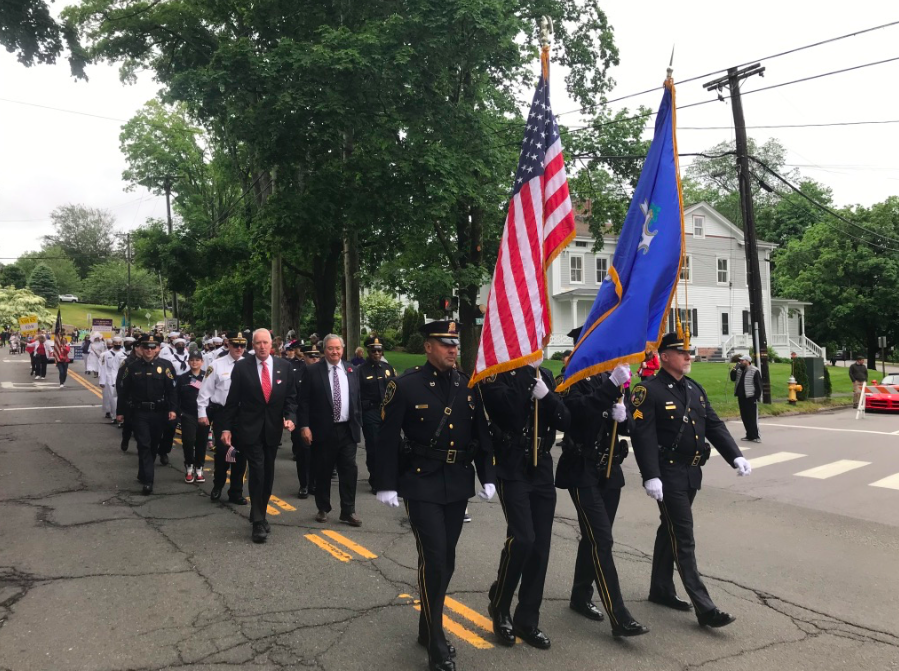 Brian Platz’s grandfather was in his mid-20s, with three children, when he was drafted into the U.S. Marines toward the end of World War II. 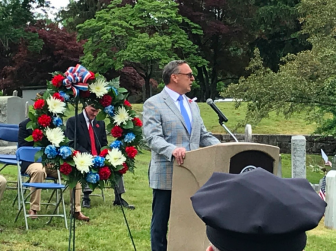 Brian Platz, U.S. Marines veteran, was the main speaker at the the May 31, 2021 Memorial Day ceremony in New Canaan. Credit: Michael Dinan

Platz on Monday morning recalled that his grandfather “would tell us that we were actually running out of men.”

“The draft began, if I remember him correctly, with single men aged 18 to 26,” Platz—himself a U.S. Marines veteran, known to many New Canaanites as the town’s chief building official—told about 300 people gathered at Lakeview Cemetery for a Memorial Day ceremony. “Then went to married men 18 to 26. Married with one child. Married with two. Married with three. Fortunately, my grandfather returned to us safely. I cannot imagine, although I served, the fear and the angst that must have consumed my grandmother, my aunt, my uncle and my mother daily. And as I said, we were fortunate, he returned safely to us, although I am certain that many did not. Imagine that. Married with three children. That’s sacrifice. And those he left behind, their sacrifice is great, as well.” 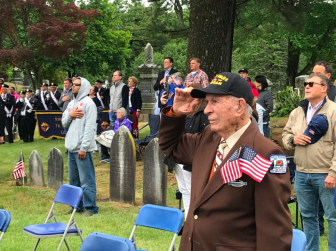 Introduced by First Selectman Kevin Moynihan as “a man of faith” who taught religious education in St. Mary’s Church in Bethel for over 20 years, Platz was the main speaker at the ceremony that followed New Canaan’s Memorial Day Parade.

Canceled last year due to the COVID-19 pandemic, the parade returned this year with a slightly new route, drawing thousands of flag-waving families, and their dogs, to Main and Elm Streets and South Avenue on a comfortably cool, overcast morning (see photo gallery above). 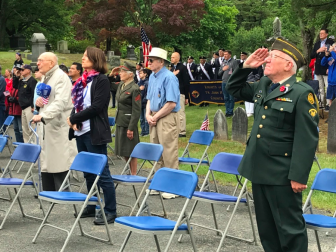 Hundreds continued past the parade’s terminus and into the cemetery for the ceremony honoring the nation’s war dead.

Led by Mike McGlinn, commander of the Howard M. Bossa and Peter C. Langenus Post 653 of the Veterans of Foreign Wars of the United States, the ceremony opened with a prayer from the Rev. Rob Kinnally of St. Aloysius Roman Catholic Church.

“As we gather to rememberer, give us hearts of gratitude for all that we have received because of the selfless gift of these heroes,” Kinnally said. “Inspire us to raise them to the dignity of the bravest of the brave. Keep us attentive to the meaning of their sacrifice and the needs of their loved ones. Let today’s ceremony open our minds and hearts to what you ask of us, as we listen and reflect as a community and a nation.” 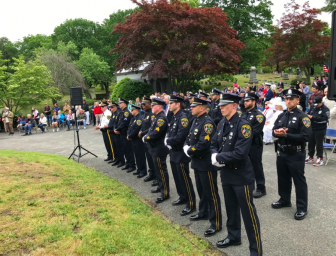 Attended by dozens of New Canaan Police, Fire and Emergency Medical Services personnel, among other municipal officials, as well as many U.S. Armed Forces veterans in uniform, the ceremony featured a moment of silence for those who died while serving, playing of “Taps” and placement of a memorial wreath by members of the Hannah Benedict Carter Chapter of the Daughters of the American Revolution.

McGlinn said the “ultimately sacrifice” of fallen servicemen and servicewomen “must never be forgotten.”

“We pledge to remember them every day, but especially on Memorial Day,” he said. 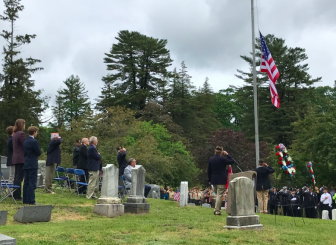 Platz, who served as an infantryman in the Fleet Marine Force during the 1980’s, said in his unscripted remarks that though “we all know the risks when we serve in the Armed Forces,” still “that does not diminish the sacrifice that some have made.”

“When we think of Memorial Day, we often think of hamburgers, hot dogs, mom’s potato salad. Barbecues. In some cases, we think of the unofficial beginning of summer, a three-day weekend away from work or school. Perhaps some of you are thinking about traffic if you’re traveling today. Growing up on Long Island, we used to ask the question: What would you call it if you lined up all the cars bumper-to-bumper on the Long Island Expressway? And the answer was ‘Memorial Day weekend.’ It’s easy to forget, given the busyness of our lives and the craziness that we’ve had for the last year, of the many blessings and how fortunate we are in our lives. Many of our good fortunes and blessings come because of the sacrifices of those that served before us and made that ultimate sacrifice.” 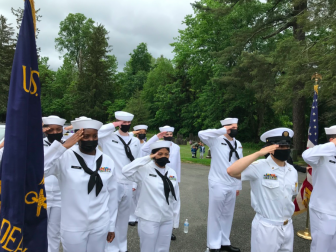 The VFW Post’s chaplain, Brian Vanderheyden, a 1965 New Canaan High School graduate and former U.S. Marine corporal and Vietnam War veteran, said while leading a prayer during the ceremony, “Oh Lord, we thank You for the sacrifices our veterans have made for us, and for peace. We gather here at these moments to remember them. We pray that You bless and protect all of Your people. Guide us on the path to unity and harmony, that we may serve You and Your people in keeping with Your holy will. May this day be a day of commemoration and honor to those who sacrificed their lives in order to give us liberty and to ensure greater freedom in our world. May the good Lord shower His graces upon our nation’s war dead. Amen.”

Platz told those gathered of “there is great truth” in sayings such as “All gave some but some gave all” and “‘Freedom isn’t free.”

“’We gather here today to reaffirm those truths with grateful hearts,” he said. “So as we go about our day, and enjoy our friends and our family, and that hot dog, let us be ever mindful of the sacrifices made by many.”