Town officials say they’re viewing the creation of a new loading zone on Main Street as temporary, after a commercial property owner there voiced concerns that it could exacerbate a sight line problem. 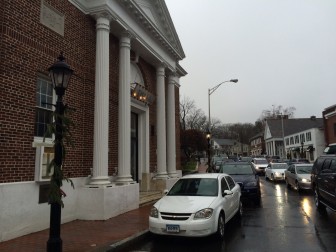 Officials plan to install a loading zone in front of the former Thali space here on Main Street by the Varnum’s alley, opposite the U.S. Post Office branch. Credit: Michael Dinan

No one disagrees that there’s a need for more loading zones in the area of Main Street at East Avenue, especially now with Gates reopened (there are alsso two new businesses, a pet supplies shop and healthy food store, coming to Forest Street). Truck drivers have habitually (as well as illegally, and dangerously) parked at the very top of East Avenue when making deliveries—a problem that town officials are addressing.

But a proposed new loading zone in front of the former Thali restaurant building at 87 Main St. (now for sale, and the restaurant’s owner is opening up a new place, ‘India,’ up the street) could make it even more difficult for motorists pulling out of the alley by the old Varnum’s, according to the commercial property’s owner.

So, the Police Commission in giving its blessing for the new loading zone suggested that it revert to regular parking as soon as possible—namely, as soon as the once long-term loading zone in front of the temporary Post Office across the street returns.

A major reason town officials shortened that loading zone’s time was because “we were so desperate for some additional short-term parking in front of the Post Office while it was there,” Police Commission Chairman Stuart Sawabini said at the group’s Feb. 25 meeting.

“Now that we have a new [Post Office] location which is maybe eight months away from being open, maybe we could” make it an all-day loading zone once again “eight months from now,” Sawabini said at the meeting, held in the Training Room at the New Canaan Police Department. “Maybe we could suggest this is just temporary until the Post Office exists?”

The commission voted 3-0 in favor of the proposal—the new loading zone restriction will be in place in the mornings only, matching those of the area in front of the Post Office, officials said.

Though motorists exiting from the Varnum’s alley must use caution because southbound traffic is difficult to see, that’s because of the road’s curvature rather than the vehicles parked immediately in front of the bank building, according to New Canaan Police Capt. John DiFederico.

“There is no light of sight there, really,” DiFederico said.

“Or you could make a right turn and sort of ‘ease out,’ ” Foley said.

Meanwhile, the ‘No Parking’ signs that will be placed along East Avenue from Main Street and down the hill haven’t yet been installed but will be soon, DiFederico said. The question for DPW is where to place them, since the entire block is only concrete sidewalk and offers no grass verge into which to drive the signposts.

The developer of the Post Office on Locust Avenue said last month that the federal agency should be in the new building and operating by Thanksgiving.