Officials say they’re going to post “No Parking” signs outside of an East Avenue business that’s been plagued by truck drivers idling outside the door to make deliveries around New Canaan. 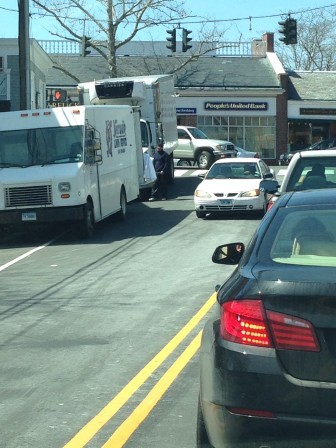 Though the truckers cannot park their vehicles outside day spa Ciel Eau at 1 East Ave.—because it’s illegal, bad for business owner Alicia Brandfellner and unsafe for motorists and pedestrians—still, those delivery drivers must be accommodated somewhere so that New Canaan restaurants get deliveries, Police Commission Chairman Stuart Sawabini said.

“We clearly need to protect her [Brandfellner’s] business but we also cannot damage their [restaurants’] business,” Sawabini said during the commission’s regular monthly meeting, held Nov. 18 in the Training Room at the New Canaan Police Department. “We need to find a compromise as we go through all this.”

Though there’s a designated 7 to 10 a.m. loading zone in front of Sleepy’s across East Avenue at the start of Forest Street, it’s rarely used because Forest is still in disarray with the mixed-use project going up by Locust Avenue, commissioners said. 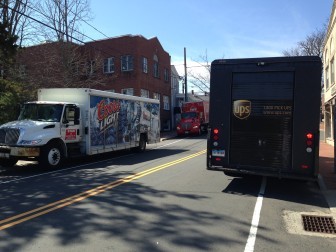 Once the Post Office moves into its new building, a loading zone in front of the 90 Main St. location can be designated again as a loading zone, but that project won’t be finished until next summer, Police Capt. John DiFederico said.

DiFederico said he would work with DPW officials to find an alternative spot on Forest Street—perhaps on the left, toward the end of the block—to designate as a 7 to 10 a.m. loading zone.

Town officials long have grappled with the problem of just where to designate loading zones in the business district. Motorists routinely ignore the designations, officials have said (see here, for example), and the town 18 months ago created two new zones on Forest and Elm.

Even so, the town continues to deal with the dangerous problem of trucks parking on East Avenue just off of Main Street. A major concern is that the big trucks force motorists turning off of Main Street into the oncoming traffic lane, Police Capt. Vincent DeMaio said. It’s “unsafe to make a loading zone” there at all, even before Ciel Eau opens in the morning, he said.

“It is an improper spot, forcing vehicles into the travel lane,” DeMaio said.

Brandfellner, who attended the meeting, said she’s kept a log of trucks parking out front of her business and that most are going to restaurants, not just on Forest but also on Main and Elm Streets.

“It’s unfortunate that I am not a restaurant, because if I were then it would be good for my business, but it’s not,” she said.

Commissioner Sperry DeCew added that it’s a bad place for idling trucks to park while making deliveries because it’s a hill.

The commission voted 3-0 to mark the area as a ‘No Parking’ zone and to find a way to accommodate the delivery trucks, trying Forest Street to start.