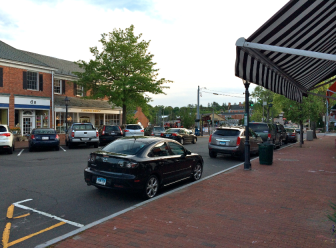 The New Canaan Police Commission at its May 20, 2014 meeting decided to approve a three-month trial whereby the stretch of Elm Street between the alley at Chef Luis, and Park Street, will be designated on weekdays from 7 to 10 a.m. as a loading zone for delivery trucks. Credit: Michael Dinan

There are “always passenger cars,” for example, in the designated loading zone on South Avenue just off of Elm Street, town resident Jeff Holland said during Thursday night’s meeting of the volunteer group that oversees off-street parking in New Canaan.

“If I was a guy driving a truck into town, I would be a little bit frustrated,” Holland said during the Parking Commission meeting, held in the Douglas Room at Lapham Community Center.

“If I was doing deliveries during the week, I would say, ‘Yeah, I am going to double-park,’ ” he added.

And that double-parking creates sightline and safety risks for pedestrians—a problem that town officials tried to address earlier this summer by designating two additional loading zones downtown, doubling the total. Here’s a map that plots them, article continues below:

The Parking Commission regularly makes recommendations to groups that include the Traffic-Calming Committee and Police Commission, which oversees on-street parking. 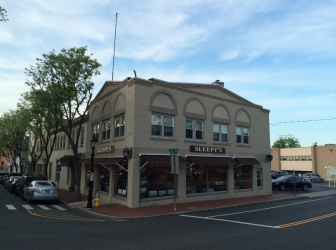 New Canaan’s Police Commission on May 20, 2014, doubled the number of authorized loading zones downtown for delivery trucks, from two to four. One new zone is up on Elm Street, the other one here on Forest Street, just off of East Avenue in front of Sleepy’s. Its’ a three-month trial. Credit: Michael Dinan

Parking Bureau Supervisor Karen Miller said it’s difficult to balance the aesthetics of signage and curb-painting with more practical concerns about use of designated spaces.

For example, she said, though more motorists may respect the South Avenue loading zone if the curb there were painted yellow, officials have been reluctant to do so.

“We have this tendency to try and make everything very village-y,” Miller said.

Down on Forest Street, a new loading zone in front of Sleepy’s just off of East Avenue is difficult for trucks to access, she said.

“When you enter, there is a handicapped space and then there are two spots dedicated to the loading zone, and I don’t know how a truck could even get into it,” she said.

Holland, who was at the meeting to discuss an idea he brought to town officials to free up parking spaces for shoppers, is a Pop Up Park volunteer who has access to a camera that’s pointed up South Avenue from Elm Street. Based on what he sees from motorists, Holland said, “there, in effect, is no loading zone there.” 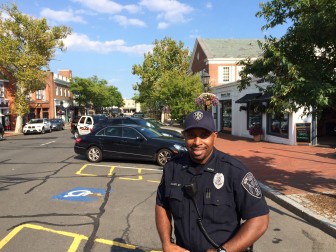 “Some of [the passenger car motorists] have their flashers on for an emergency: to run to Bruegger’s,” he said flatly.

“He said the CIO, will been regular foot patrol and will ticket and move along violators as he sees fit,” Richey reported.