The Board of Education last week voted unanimously to accept a donation of more than $32,000 from the New Canaan High School PFA for a new sign on the building as well as several outdoor tables for student use. 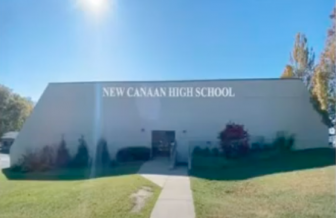 NCHS Principal Bill Egan said the new plastic lettering at the “band entrance” on the north end of the school will serve to inform visitors and passersby on Farm Road of what the building is.

“When you drive up Farm Road, you would not necessarily know what school this is,” Egan told members of the Board of Education during their March 15 meeting, held via videoconference. “So we have visitors who come in and they drive up and sometimes we will hear, is that the school?”

He shared an early-stage rendering of the planned sign from the chosen vendor, Hung Well Signs LLC. The same company did the “Home of the Rams” sign at the back of the school, overlooking Dunning Field.

Board of Ed member Penny Rashin thanked the PFA “for making these amazing donations that so improve the look and quality of our schools.”

“It’s just fantastic and I am just so appreciative as a Board of Ed member for all you do for our students,” Rashin said.

Egan said he “cannot thank Jody and Courtney” and other PFA members enough for their generosity. He referred to PFA Co-Presidents Courtney Langford and Jody O’Donnell, who was in attendance.

The red and black rectangular and round tables with umbrellas and bases will be placed for students in courtyard and grassy areas outside the cafeteria.

Egan said that “this year during the pandemic, we realized how much the students really used the outdoors and we wanted to expand the cafeteria area outside, so the PFA is graciously donating about 20 tables to these areas out back.”

Board of Ed members and Superintendent of Schools Dr. Bryan Luizzi talked about the alignment of the sign planned for the Farm Road-facing exterior wall of the high school. The roof line itself is not perfectly horizontal, and Luizzi and members of the elected body discussed whether it would look awkward to have a slightly wedge-shaped gap between the top of the sign and roofline. Luizzi asked Egan to work with the sign company to address the concern. Board of Ed members also asked whether the new tables would be removed when it’s inclement (no, they’re all-weather, though the umbrellas would have to come down at those times).

Board of Ed Chair Katrina Parkhill called the tables “such a gift to the students” and said it will be “awesome” to have “another place to eat,” socialize or take a break outdoors.