Town officials on Monday night approved a developer’s application for a variance to go over coverage on a pair of widely praised Federal-style townhouses on Main Street by adding a deck off of the rear of each. 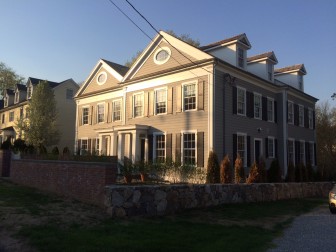 On conditions including that the decks be constructed entirely of wood (more on that below) and remain open without a roof or other cover, the Zoning Board of Appeals at its regular meeting approved 5-0 the variance for 474 Main St.

“It’s definitely better than what was there prior to that,” Edmonds said at the meeting, held in the Sturgess Room at New Canaan Nature Center. “I think the topography of the land is very difficult. It’s very tough going, very tough back there and he’s really worked hard to improve it.” 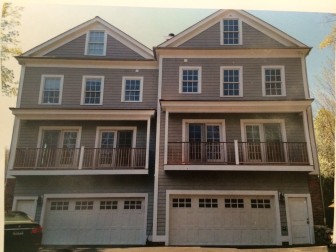 The rear at 474 Main St. as it is now. Contributed

Kaeser in presenting his application said the property is limited in terms of options for outdoor space, given that it backs up to wetlands (the Fivemile River), has its garages cut into the bank of the hill around back and needed its own septic. The 2-foot balconies that extend under a cover of the same length now are to be extended a further six feet under Kaeser’s plan for the cantilevered decks.

Board members asked how the deck would be supported (a bracing beam underneath), what materials would be used to construct the deck (mahogany decking, pine around it, cedar rails), whether there’s a fire safety issue with the proposed decks if people are grilling on them (probably not), whether any additional cover was planned for the decks (no) and what prompted Kaeser to seek to build them.

To the last question, Kaeser answered that a lack of decks to this point has been a barrier to selling the units.

An occupant of the southern unit has said she’d love to buy it but noted that there’s no outdoor space and “everyone looks at the northern unit and says, ‘This is great, but where do we put our grill?’ ” Kaeser said. “You can’t grill [facing] Main Street, it’s just not going to happen.”

Board member John Kriz, in his last meeting with the ZBA (he’s going to the Planning & Zoning Commission), said he had concerns about the deck being enclosed.

In the past, Kriz said, “we’ve had a number of porches where we say it can’t be plumbed and so forth, so that it cannot become a separate sleeping quarters. It is an open deck, which is what the intention is.”

Citing as a hardship the narrow lot, elevation and extensive wetlands in back, the ZBA approved the decks’ construction on conditions that they may not be enclosed in any way, extend no more than eight feet from the outer wall of the house, are constructed entirely of wood and that the overhang covering the decks extends no more than its current two feet.

The board spent a great deal of time on the “entirely wood” composition, and eventually amended it to say that if steel is used as a supporting material for the deck, that it be enclosed entirely in wood.