In this installment of “New Canine-ites,” featuring spot profiles of local dogs, we speak to town resident Bob Landeck about Brooke, an 8-year-old Labradoodle that he’s had since she was five. 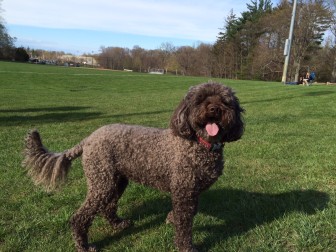 Acquired after Brooke’s original family discovered the animal wasn’t a good fit, the Labradoodle is a “great dog,” Landeck said on a recent afternoon from a grandstand at Waveny’s Orchard Field, while watching his daughter start at third base for the varsity New Canaan High School Rams softball team.

“I don’t need a leash with her,” he said. “She is nice to anyone and great around kids.”

An enthusiastic fetcher, Brooke’s favorite places around town include both Irwin and Waveny.

Asked what type of food his dog eats, Landeck answered: “Dog food.” He later clarified that he picks up hard and soft food from Pet Pantry downtown and mixes the two together.

Brooke’s vet is at PetSmart on Connecticut Avenue in Norwalk, he said.

“They are very nice in there, and I take her to a little groomer on Hope Street in Stamford [Canine Coiffeurs],” he said.