The U9 boys Red Team came out extremely strong against top players in their age group this past Sunday when they defeated Wilton 6-3. 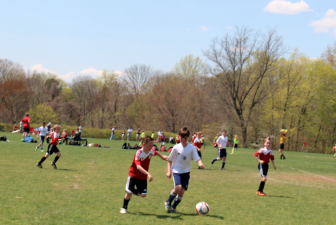 After falling behind Wilton 2-0 early, Jack Cuda received a skillfully passed ball by Ethan Schubert and Teddy Hoffstein to put New Canaan on the scoreboard.

This was the start of New Canaan’s offense keeping the Wilton goalie busy with two shots by Benjamin Bilden, two by Augusto Baldini and another by Jack Cuda to give New Canaan a soaring lead.

The strong New Canaan defense made up of Max Lowe, Cole WIlson, Jaden Oyekanmi, Ted Werner and goalkeeper Teddy Balkind displayed impressive pressure to not allow Wilton to catch up.

The boys have moved up two levels this season to play in the highest division for their age.

Under the direction of their returning coach Chris Gilligan, they had a spectacular win. 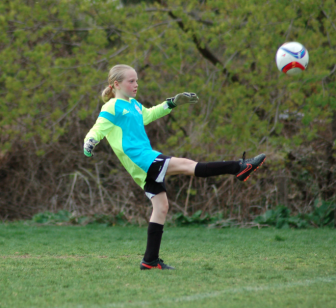 Addie Cannon punts the ball down field after making a save. Contributed

The New Canaan Soccer Girls U10 Red Team traveled to Fairfield on Sunday to take on the FUSA Red 2 team in what turned out to be a real nail-biter.

More often than not, the offensive play during a game gets the glory but the unsung heroes of Sunday’s game came from the defensive side of the field.

The first half began with the very strong Fairfield team controlling the ball and field position. Making repeated runs on the goal, Fairfield was consistently thwarted by the outstanding defensive play of Kate Caione and Katharine Byrne. The pair managed to break up coordinated offensive attacks and the superb goal tending of Katie Polacek anchored the defense to keep Fairfield from scoring. Polacek frustrated the Fairfield offense with her goal keeping skills that sent Fairfield to the sidelines demoralized as the half ended with a 0-0 score.

Energized by the defensive play in the first half, the New Canaan offense came to life in the second half and scored the first goal of the game. Ava Gizzie stole the ball at midfield and broke away past the defenders to blast a shot past the Fairfield goalkeeper into the back of the net.

Up 1-0, the defense continued its stellar performance with Addie Cannon in the goal. Blocking every shot sent her way, Cannon with the help of Ella Patterson, Evelyn Slatoff and Kate Caione shut down Fairfield and turned the ball up field for the offense. As the offense attacked in front of the Fairfield goal Katharine Byrne recovered a rebound and buried it into the back of the net for an insurance goal.

As time ran out, Fairfield was still scoreless and New Canaan went on to their second consecutive win and shut out.

New Canaan U13 Girls Red travel soccer team remain undefeated this season (1-0-1) as they notched a 2-1 victory at the Waveny Water Tower turf field this past Sunday against Ridgefield Black.

Despite New Canaan’s great offensive pressure from its five corner kicks and six shots on goal in the first half, the squad came up empty.

New Canaan mounted another offensive drive stringing a series of passes through the midfield which culminated in Taylor Frame finding the top right corner of the net for New Canaan at the 75-minute mark.

With a minute left to play, Ridgefield was awarded a penalty kick for foul infraction within the 18-yard giving them a chance to square the match but the strike went high over the crossbar.

New Canaan’s entire midfield and defensive line were collectively a force to be reckoned with that Ridgefield couldn’t breakdown as evidenced by them only being able to get three shots off on goal all match. Well done!