The dirt piled conspicuously at Saxe Middle School will remain there through the major, estimated 15-month construction project now underway unless some place else is found for it, officials said Tuesday. 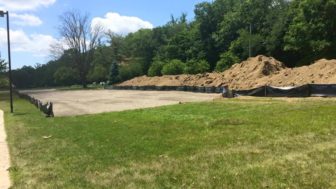 Mounds of topsoil located off the corner of Farm Road and South Avenue and elsewhere at Saxe are to be returned to the site “to smooth it back over” once a major renovation and expansion concludes next fall, according to Penny Rashin, chairman of the Saxe Building Committee.

Responding to a question from Selectmen Beth Jones at a Board of Selectmen meeting, Rashin said she was aware that “everybody is going to want to know about the dirt because you see it as soon as you come in on South Avenue.” 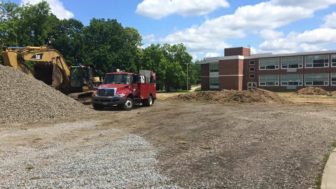 Jones asked about it because, she said, “if I was a junior high kid and I saw those big piles of dirt, I just would not be able to resist.”

“You will need a monitor for that,” Jones said at the meeting, held at Town Hall.

The exchange came as Jones and First Selectman Rob Mallozzi voted 2-0 to approve a guaranteed maximum price in the construction manager’s contract for the project, which will see parts of Saxe expanded and a 12-room addition created on the campus. Officials in a ceremony broke ground on the project last week, minutes after school had let out for the summer.

According to Rashin, the committee “expects to bring the project in well within the appropriated funds,” at about $18.2 million overall, including a contingency allotment and costs for professional fees and furnishings. The town had approved $18.6 million last fall following a series of emotionally charged public hearings.

“While we will have change orders—there are change orders in every project—we think that we are in good shape,” Rashin said of the project.

Mallozzi, who opened the discussion by thanking Rashin and committee member Jim Beall for their hard work and spirit of cooperation between the district and town vis-à-vis the Saxe project, noted that “we will certainly hit that [$1.6 million] contingency but most likely not to the full [extent], so you brought this in at the right number.”

Selectman Nick Williams did not attend the meeting.