Even an estimated $5.3 million renovation of the Saxe Middle School auditorium won’t accommodate a burgeoning student population, meet visual and performing arts space needs and bring much-needed flexibility to classroom scheduling, according to town officials overseeing a renovation of the facility.

Creating sufficient storage and practice and classroom space for an increasingly large student body will require a footprint expansion of about 6,200 square feet off of the building’s south side—a project whose early estimate comes in at about $10.1 million, an owner’s rep for the project said at the Board of Education meeting Monday. 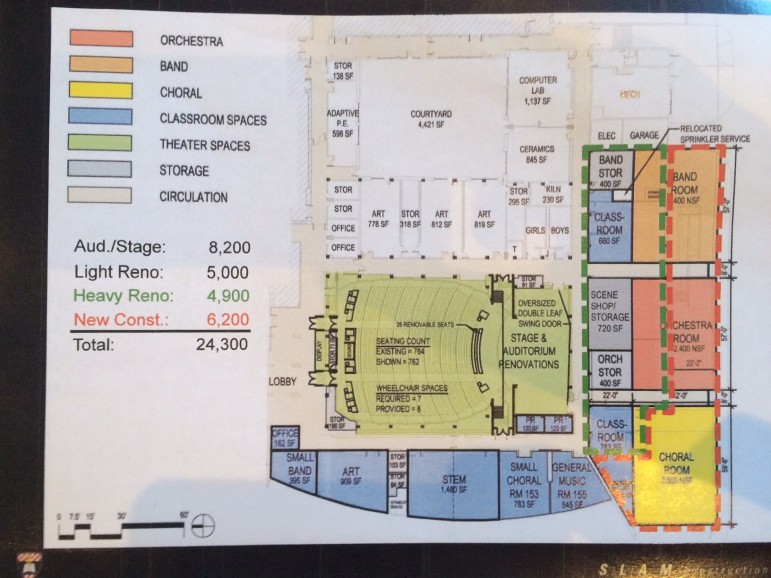 The area outlined in red here shows a proposed expansion to the footprint of Saxe Middle School on its south side in front. Rendering from the SLAM Collaborative of Glastonbury, owner’s rep on a project to renovate the Saxe auditorium.

The estimate is conservative, said Gene Torone, executive vice president of construction services as Glastonbury-based S/L/A/M Collaborative. Though some money may be saved in lower-cost materials, the figure doesn’t include removal of contaminants that officials expect to find as more testing is done on the auditorium, which is original to the 1957 building.

“There is evidence of some [hazardous materials],” Torone said at the meeting, held in the Wagner Room at New Canaan High School. “We just don’t know the extent of it at this point.”

Torone and S/L/A/M Senior Project Manager Kemp Morhardt presented two options to the board: A full renovation of the auditorium, or that very renovation plus an expansion around the back of it for “right-sized” band, orchestra and choral rooms. The Saxe Auditorium Building Committee—which includes not just district officials but also Town Council members and others—voted unanimously in favor of the second, more comprehensive option, according to Penny Rashin, a BOE member who serves as the committee’s chair.

On a high level, the larger project calls for the relocation to larger spaces of what now are cramped practice rooms, and creation of storage areas where absolutely none now exist.

Morhardt pointed not only to projections of rising enrollment at Saxe that by now are familiar to New Canaanites, but also to what he called “recommended space standards” for band, orchestra and choral rooms—essentially, a measure of how many net square feet should secured per seat in such rooms.

As it is now, 288 students are using space that, by those standards, should accommodate just 195. With the $10.1 million job, Saxe would be able to accommodate 338 kids.

The problems with the Saxe auditorium are well-documented: acoustics are bad, there’s no storage, its paint has PCBs, there’s no catwalk system in the attic, it doesn’t meet ADA standards, some seats are broken or missing and its control booth is obsolete.

No one denies that the auditorium needs a full renovation. Solving for additional problems such as lack of storage and practice space is a separate but related question—according to Torone, tackling the “classroom wing” separately later on will mean spending an additional $1.7 million or so.

Board members ultimately couldn’t agree on whether to back the committee’s recommendation for the comprehensive $10.1 million option, and will return Jan. 20 to make a decision.

They asked about phasing for the project, the extent of remediation work and whether the cost estimates included plans to shift students around during construction (yes).

Torone said the renovation of the auditorium will take nine months, and that if the “classroom wing” is tackled simultaneously—say the project starts in June 2016—then it could be wrapped up by the following August.

Responding to a question from BOE member Sheri West, Saxe Principal Greg Macedo said the new, flexible and large performing group spaces envisioned for the south side of the school “are what will allow us to grow into the future.”

“Currently, the space restrictions do not allow me to run multiple grades at same time in my music program—I can only schedule on grade at a time,” Macedo said. “With that flexibility, I can open up and schedule two grades at a time. What does that mean? Instead of the lack of music spaces driving the entire maser schedule, it allows the maser schedule to sit and meet the needs of all the other programs in the school, in addition to music.”

Noting that “innovation is restricted by the lack of flexibility,” Macedo added that Saxe cannot run certain arts programs—say, eighth grade music theater—because the space and attendant schedules are so hemmed in.

Board of Ed Vice Chair Scott Gress called for more time to mull over the price tag for renovation in the context of this year’s budget request.

“I really want to think about, ‘Is this the best use of the $5 million we are going to ask the town for?’ ” he said. “There is no question that we should have done the Saxe auditorium the first time [in 19997], and we may come back and say, ‘Hey, we really should have put the expansion on the rooms when we did this project.’ I’m not sure I won’t get there but I am certainly not there yet.”