The longtime owners of an iconic and prominent New Canaan house—a home that historians say was the first in town to be lighted by gas, in the 1870s—are seeking special permission to subdivide their 1.8-acre lot in order to preserve the historic structure. 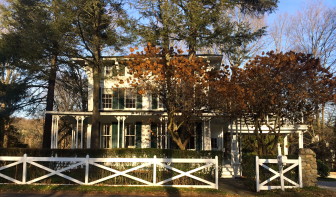 The 1852-built mid-Victorian at 528 Main St. could be preserved through conservation easement that comes with approvals for a subdivision on the lot. Credit: Michael Dinan

Under the New Canaan Zoning Regulations, there isn’t quite enough buildable land at 528 Main St. to carve out a second parcel within the lot that includes the stately white mid-Victorian-style villa home that historians date to about 1852.

Yet by expanding a section of the zoning regulations that deals with historic preservation—specifically, to offer some relief from density requirements, as that relief exists now for dimensions and total area—New Canaan could “allow for preservation of a special and significant dwelling and a piece of our history that would otherwise be lost,” according to Michael Sweeney, an attorney with Stamford-based Carmody, Torrance, Sandak & Hennessey LLP. 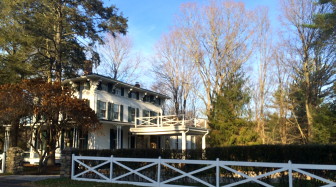 The home at 528 Main St. is one of the most recognizable in New Canaan. Credit: Michael Dinan

The homes owners for 18 years, Thomas and Marianne Reifenheiser (it’s been in the family since 1946) “have tried to sell the property over the past seven or eight years, and really without success,” Sweeney told members of the Planning & Zoning Commission during their Nov. 17 regular meeting, held at Town Hall.

“Everyone coming in to purchase the house concludes that the structure would have to be razed and with the size of the property a large, typical New Canaan house to be built there. What we hope is that there is a way, with these changes to the regulations—which I don’t think will have unintended or negative consequences to the town, actually give you a little bit more leeway as you look at similar properties going forward—will allow the preservation of the house and creation of the conforming lot next door.”

Plans call for the creation of two separate lots—one at 1.07 acres with the existing house (its porte cochere, though pretty, is not original and probably came in some 70-plus years after the home went up), and another .79-acre lot south of the historic house that would include the corner of Main Street at Old Norwalk Road. Under the applicant’s proposal, P&Z would have sign-off on any new dwelling to be built there, to ensure that it conformed with the existing house and neighborhood.

Sweeney is seeking not only site plan approval though a special permit (the New Canaan Health Department and Inland Wetlands have given initial approval), but also a text amendment to the zoning regulations themselves, since the proposed “first cut” at 528 Main would run afoul of a section in the regulations that deals with density rules in proposed subdivisions, among other actions—see page 55 here.

As proposed, that amendment to the section of the zoning regulations that addresses “Preservation of Historic Structures”—see page 145 here—would add a waiver for density which would say:

“The Commission shall be restricted to the minimum amount deemed necessary to encourage preservation of the historic structure. Where a historic structure is preserved in connection with a first cut or subdivision application:

“I believe our application satisfies your desire to maintain this property but in a way that doesn’t violate the spirit of the zoning regulations,” Sweeney said.

Ultimately, on P&Z Chairman John Goodwin’s advice that it always pays to take more time with a complicated application, the group continued its decision on the proposed text amendments and special permit to next month.

Though one Old Norwalk Road neighbor attended the public hearing to also ask for more time with the application, the Reifenheisers’ plan received a resounding endorsement from Janet Lindstrom, executive director of the (member-supported) New Canaan Historical Society.

Writing that the home has “several special features which make quite an impression,” Lindstrom in a letter read into the record by Sweeney said that “the records tell an interesting story about this estate” (more on that below) and that “the loss of the structure would be a loss to the town and our local heritage.”

Sweeney’s colleague at the law firm, Jacqueline Kaufman, reviewed the history of the both the home and lot for P&Z. Here’s a history of the property filed with P&Z as part of the application:

“In short, the dwelling was built by the Hanford family in or around 1852 and is classified as a Mid-Victorian design or “Victorian Villa.” The 10-foot-high ceilings, long, eyebrow windows, intricate supports and porch, are indicative of architecture of this period. The foundation of the dwelling may date back to the 1760’s. The Hanfords were an original New Canaan family who owned the property since the 1760’s (perhaps earlier) and resided in town for several generations. The Property was originally part of a larger, 40-acre estate owned by Captain Hanford.

“In 1867, the estate was sold to the Starr family, who organized the Starr Military Academy. The Historical Society’s records indicate the dwelling may have been used for a period of time between 1867 and 1869 as barracks for the cadets who attended the Academy. After the Academy closed in 1869, the dwelling at 528 Main St. was vacant through 1871.

“In 1871, Samuel Whitney and Thomas Fairty took title to the property as S. Whitney & Co. and leased the property. Mr. Whitney died shortly after making the lease and Mr. Fairty sold the Property to Ida F. Williamson. The Williamson family lived at the Property until 1890 with their children and extended family. Mr. Williamson is said to be one of the first ‘commuters,’ as he worked in New York City as a printer. In 1879, the Williamsons’ home became the first dwelling in New Canaan to be lighted by gas. In 1890, the Williamsons moved to New York and mortgaged the property to the state of Connecticut.

“Subsequently, the property changed hands several times. In 1920, Charles E. Blaney took title to the property (the entire 40 acres) as The Brook Realty Co. Mr. Blaney was married to famed vaudeville actress and suffragette, Cecil Spooner Blaney, and was also a revered actor, playwright, producer and theater owner, himself. The Historical Society records indicate that the Blaneys were some of New Canaan’s earliest resident-celebrities. It is believed that the porte cochere was added by the Blaneys in the 1920’s. During their residency, pieces of the Property were sold. Mr. Blaney died in 1944 and Mrs. Blaney sold what was left of the Hanford homestead to Robert C. Bell in August 1946 and the Bell-Reifenheiser family has used it since that time as its family residence.”

Doug Di Vesta, an engineer who developed the site plan, said that the plan is to install a detached garage north of the existing house. Since the property already has curb cuts on both Main Street and Old Norwalk Road, no more are needed—the one from Main will serve the existing house and the one on Old Norwalk Road will serve the new lot, Di Vesta said. He reviewed draining, erosion controls and the plan for septic on the property (it’s hooked up to town water).

Commissioners asked whether hay bales would be temporary during construction (yes), whether the well on the property is used (no it’s been abandoned for some 60 years and the lot is on town water) and whether the manmade pond downgrade from the existing house would be divided between the two “new” properties (probably, though one or the other party may become ultimately responsible for its maintenance).

P&Z commissioner John Kriz flagged one piece of the recommended conservation easement, to be placed in land records in order to ensure that the existing historic dwelling is preserved. According to Kriz, such a responsibility would come with an attendant financial burden, since enforcing the easement would require, for example, site visits and assessments. A group such a Historical Society might assume such responsibilities, Kriz said.

Sweeney responded that the conservation easement on the original house would be similar to any other condition imposed on an application, where P&Z is responsible for making sure property owners adhere to them.

“We are not looking to create a mini Historic District Commission like the one on God’s Acre,” Sweeney said. “We are not seeking to put an obligation on this commission to micro-manage every improvement that takes place within the dwelling.”

The next regular meeting of P&Z is scheduled for Dec. 15.

2 thoughts on “Owners of Historic, Prominent New Canaan Home Seek Subdivision That Would Protect It”