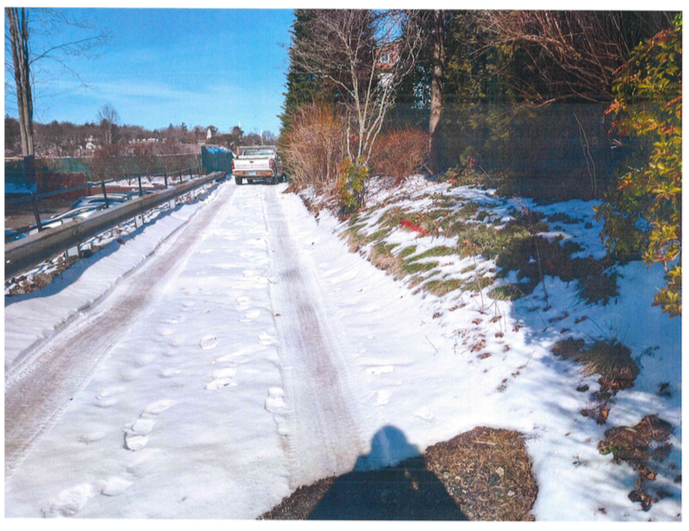 The owners of a major residential project on the edge of downtown New Canaan are seeking permission to forgo building a fence separating an adjacent development from a planned pedestrian accessway through the property—a proposal those neighbors are pushing back on, officials say.

According to an attorney representing the owners of The Vue, an apartment-and-condo complex formerly known as Merritt Village, the fence that was to run off of Mead Street, blocking off the planned walkway from Mead Commons is unsafe and unnecessary.

Owner M2 Partners “recently learned that the installation of the fence will result in significantly impairing emergency access to the property,” attorney Steve Finn of Stamford-based Wofsey, Rosen, Kweskin & Kuriansky told members of the Planning & Zoning Commission in a statement attached to an application to amend conditions of his client’s Special Permit.

Citing an April 15 email from Fire Marshal Fred Baker, Finn said “that the emergency accessway from Mead Street is already very restrictive and that construction of the fence ‘would reduce the width further yet, making the driveway all but useless for emergency access.’ ”

Additionally, “the installation of the fence is unnecessary because current landscaping and topography provides more than adequate screening and will serve as a significant deterrent to walkers seeking to gain access to the pedestrian accessway from Mead Commons,” Finn said.

“[A] dense landscape buffer” already screens the accessway from Mead Commons “and the topography along the property line is relatively steep,” Finn said.

One condition of the project’s approval from P&Z in late-2016 was: “A permanent fence shall be installed between the accessway and Mead Commons as approved by the zoning inspector prior to installation.”

According to Finn, a representative of M2 Partners reached out to Mead Commons “and was originally hopeful that Mead Commons would agree to the modification of the condition.”

However, the representative “received an email from Mead Commons stating that ‘we are very much in favor of a fence,’ ” Finn said.

P&Z is scheduled to take up the application at its regular meeting at 7 p.m. Tuesday. M2 Partners also is seeking to use black asphalt for a parking courtyard rather than a stamped, decorative concrete because the latter is “of very low durability and is subject to crumbling and disintegration,” Finn said.

The Vue is taking shape in four buildings laid out on a 3.4-acre parcel accessible by Park and Maple Streets. Two apartment buildings with a total of 59 apartments are nearing completion and are to be ready for move-in by year’s end, the project’s developers say, while 40 condos in the other two buildings are scheduled to be ready by spring 2021.

Finn in his application statement noted that P&Z’s Special Permit conditions already were amended once, in 2017, in connection with a burial ground, number of underground spaces and a six-foot temporary site security barrier fence.

The fence in question now abuts Mead Commons for about 205 feet, running along the east side of a 12-foot-wide accessway that is to serve as a pedestrian mid-block connection to the downtown, Finn said. A representative from Mead Commons had asked for it “in order to ensure that people would not access the easement from the Mead Commons property,” Finn said, and M2 Partners “did not object to the condition requiring the fence because it did not think it would have any negative impact and wanted to appease the concerns of the neighbor.”