Those caught violating local parking rules—or who at least are accused of such, with photographic proof—soon will be able to settle up with New Canaan at Town Hall instead of schlepping it to the second floor of the Police Department. 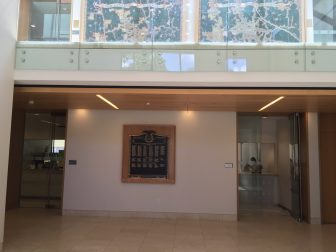 Inside the “new” northern entrance to Town Hall. The Parking Bureau is going in on the right. Credit: Michael Dinan

At First Selectman Kevin Moyinhan’s request, the Parking Bureau is relocating to the first-floor space at 77 Main St. that had been occupied by the fire marshal (now downstairs).

With the move, a good portion of paying services in New Canaan—through the offices of the tax collector, town clerk and now, parking—will be consolidated a single area.

“It’s crazy, people come in to pay their parking tickets and they say, ‘Oh you have to go over to the police station.’ ‘Well where’s the police station?’ And on the second floor, by the way,” Moyinhan said during a July 26 media briefing in his office at Town Hall. “So that was one of the primary reasons to move them over here. Besides the fact that most of their work is done downtown and it makes more sense for them to walk over [to the village center].”

The Parking Bureau’s move will be completed on or around Aug. 24, officials said.

According to Moynihan, a new interior doorway and glass window will be installed for the new Parking Bureau space.

By moving the department to Town Hall, New Canaan additionally is expected to save money on a vehicle for parking enforcement officers, who can patrol the downtown on foot.

The change is “to make it more efficient and also in anticipation that they were going to be displaced at the Police Department,” Moynihan said.

He referred to a plan, now on a backburner, that would have seen the upper floor of NCPD headquarters renovated for a future home of the Board of Education. (The first selectman now favors a plan to acquire 258 Elm St. downtown for both the police and district, and selling the Police Department’s South Avenue building for conversion into senior housing.)