Saying it would generate an additional $9,000 in revenue, parks officials said this month that they’re planning to propose higher fees for those who use the dog run at Waveny. 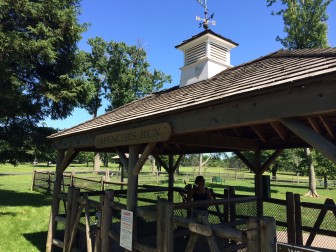 An early version of the new slate would see the annual registration fee for a first dog at Spencer’s Run go from $25 to $40 for residents and $40 to $60 for nonresidents, while the fee for additional dogs would rise from $15 to $25, according to the Parks & Recreation Commission.

Chair Sally Campbell said the Commission could vote on the proposed higher rates at its next meeting and that they would go into effect after next year’s budget season.

“The point is that these are quite low and there is a lot of maintenance that needs to be done in the park and it’s supposed to be the people who go to the park are the ones who are supposed to be the ones funding the repairs through fees,” Campbell said at the April 11 meeting, held at Lapham Community Center.

There are 843 members of Spencer’s Run and just over half of them are nonresidents, according to Commissioner Rona Siegel.

Town Councilman Sven Englund, a guest at the meeting, asked why town residents would pay higher percentage increases on the proposed new registration fee for an initial dog.

“Why do the residents have to support the out-of-towners?” he said.

Campbell said the proposed fees resulted from “back-of-the-envelope” calculations done that very day and that the Commission would take a second look at them.

“We will take that into account before we vote on them,” she said.

The discussion followed a presentation by Siegel on maintenance and upgrades planned for Spencer’s Run, a fenced 1.5-acre area tucked alongside the platform tennis courts, where the main road through Waveny meets Lapham Road. After proving to the Recreation Department that their dogs are licensed and vaccinated, registrants sign a waiver and agree to abide by the 13 rules of Spencer’s Run—such as removing prong, choke and spike collars (from the dogs).

Siegel said users are planning a “cleanup” at Spencer’s Run and that improvement projects to be paid for out of a self-generating fund there include installing an asphalt path leading into the center of the park to relieve crowding in front of the gated vestibule, creating two maintenance entry double-gates, replacing a Rubbermaid container for the dog poop bags that people use to pick up the animals’ excrement (including what “residue” may reasonably be expected) and repairing the lock on a seed box.

She also said park users would request a free assessment from the tree warden of the health of the trees in Spencer’s Run.