Patricia K. Brooks, Minneapolis native and Connecticut author and journalist, died peacefully in her New Canaan home on January 28, 2021, surrounded by family. She was 94. 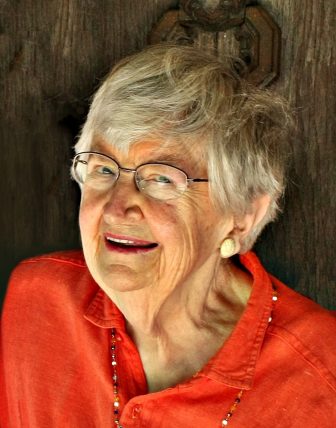 A prolific writer who authored more than two dozen books and wrote hundreds of magazine and newspaper articles, mostly on food and travel, Ms. Brooks was perhaps best known for her work as the restaurant critic for the New York Times‘s Connecticut Weekly section. From 1977 to 2016, she filed an estimated 1,800 reviews, never once missing a deadline. That despite a travel schedule which, over the course of those years, had her visiting 65 different countries on five continents.

She once described herself as a “typewriter for hire,” though critics and admirers found her work more interesting than that modest self-description implies, with a style that was graceful, creative and often laced with wry humor. She was the recipient of several awards for her writing.

Patricia Janet Kersten was born in Evanston, Illinois, on December 17, 1926, to Robert and Mable Harrington Kersten, and grew up in Minneapolis, Minnesota. She graduated with a B.A. from Vassar College in 1947, an M.A. from the University of Minnesota and in 1949 she pursued graduate studies in English literature at the University of London in London, England. While there, she met Lester Brooks, a fellow student and native of Des Moines, Iowa. They were married in 1950.

The next year, in 1951, the Brookses moved to Manila, the Philippines, where they lived for two years. During that stay, Ms. Brooks sold a travel story to the New York Times, beginning a career as a freelance writer that would span six decades. Their meandering return from Southeast Asia took the Brookses all over the Far East and Europe and lasted nearly a year, instilling in both of them not just a lifelong lust for travel, but also an appreciation of diverse cultures and their native cuisines.

On returning to the United States, the Brookses resided briefly in Astoria, Queens, before taking up residence in Connecticut, first in Norwalk, in 1956, before permanently settling in New Canaan, in 1959. Her adopted state featured prominently in much of Ms. Brooks’s writing, including in Yankee magazine, The Berlitz Travelers Guide to New England, Dorling Kindersley’s Eyewitness Guide to New England, and Food Lovers’ Guide to Connecticut, one of her many books.

Ms. Brooks was an insatiable reader who could talk endlessly about literature and participated in three book groups. She was no less voluble on the subject of politics. An ardent Democrat who for many years was active in both local and state politics, Ms. Brooks helped to mobilize New Canaan contingents that joined marches in Washington to protest against the Vietnam War, in favor of civil rights, and, using media connections, publicized and took part in local activism against President Richard Nixon’s controversial policies.

Instead of flowers, donations may be made to the New Canaan Historical Society (13 Oanoke Ridge, New Canaan, CT 06840), or the Convent of St. Birgitta (4 Runkehage Rd, Darien, CT 06820). A memorial service will be held at a later date.