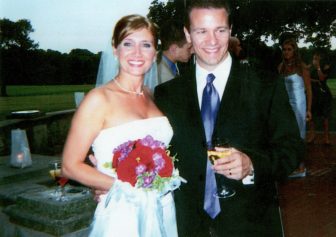 Ann and Steve Cannon at their Waveny wedding. Contributed

A town resident from 2000 to 2015 who was married to his wife, Ann, at Waveny (the couple’s youngest daughter, Carly, was born while the family lived here and attended East School), Cannon is CEO of AMB Sports and Entertainment, parent company of the Atlanta Falcons. He graduated with honors from the United States Military Academy at West Point in 1986, was Airborne Ranger qualified and served as a 1st Lieutenant in West Germany during the fall of the Iron Curtain. During his time in the Army, Cannon also served five years as an artillery officer. Selected for the award from among 32 nominees by panel of judges including representatives from the U.S. military, NFL and USAA, Cannon was cited for his “constant military first mindset and utilization of the NFL’s platform” to provide “active duty service members, veterans and military families with first-class experiences and support.” Asked for a favorite memory of the town, Cannon told NewCanaanite.com in an email, “We were married at Waveny so we love that place and were regular attendees of the Wednesday concerts and 4th of July fireworks.”

Police at about 3:10 p.m. on Feb. 1 responded to the Hatfield Mews condo complex on Elm Street on a report of an individual receiving a threatening phone call and email. 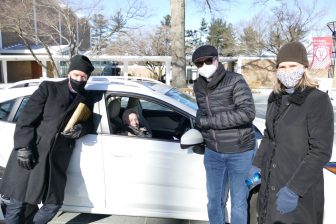 The New Canaan Building Department on Jan. 28 received an application to demolish the 1962-built ranch-style house at 955 Ponus Ridge. 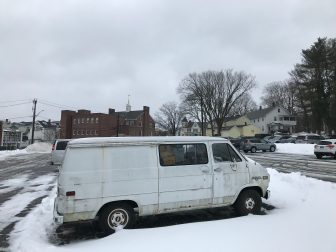 Police say the white van that officials described earlier this week as “abandoned” for about one year in the Locust Avenue municipal parking lot is legally registered and allowed to park there overnight.

The town since July 1 has spent $20,820 in legal fees regarding the proposed terrace at God’s Acre, according to a legal bill approved Jan. 26 by the selectmen, making it the single most-expensive legal matter handled by the town attorney this fiscal year. The town in September hit a roadblock on plans for a year-round flagstone terrace at the top of God’s Acre when the Congregational Church of New Canaan asserted that it has legal rights to the property as its own church cemetery. First Selectman Kevin Moynihan has called for the question of who owns God’s Acre to be resolved. The $20,000 figure includes $5,312.50 in legal costs accrued in December. Line items listed under “God’s Acre Platform” include a Dec. 16 Zoom call with Moynihan and a staffer in his office, Administrative Officer Tucker Murphy, as well as attorneys for the town.

Town Councilman Cristina A. Ross during a Jan. 21 committee meeting said that New Canaan, in deciding what to do about a future town animal shelter “should look into perhaps doing it with another small town or sub-leasing space from Stamford or Norwalk to accommodate that very small amount of animal population that we need to shelter.” In response, Officer Allyson Halm of the New Canaan Police Department’s Animal Control section said, “Leaving jurisdiction is a liability issue. If a police officer picks up a dog at 6 p.m. and has to drive to Stamford with that dog, opens the door, it gets out and gets killed, yikes.” Halm added, “Leaving jurisdiction routinely could be an issue.” Here’s audio from this segment of the meeting:

Moynihan said during Jan. 26 Board of Selectmen meeting, “I wasn’t trying to deflect responsibility.” He referred to his assertion in December that the town’s long-discussed animal shelter falls under the jurisdiction of the Police Commission, not his own office.

Murphy said during the same meeting that a campaign from a town-appointed tourism committee, called “Live New Canaan,” has been “extremely successful on a number of fronts.”

At the request of Moynihan’s office, town officials are reviewing and posting allowable occupancy levels for restaurants and spas in town, according to Fire Marshal Paul Payne’s Jan. 7 activity report to the Fire Commission. 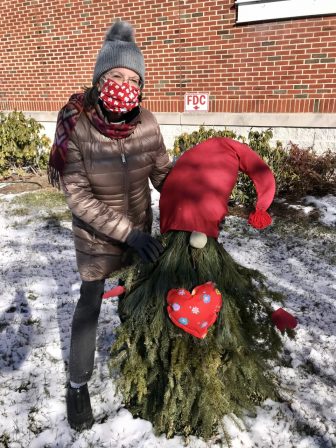 Stand Together Against Racism (S.T.A.R) is offering a six-session workshop series titled “Tools for Building an Anti-Racist Community: Awareness, Conversation, and Reparations” starting on Tuesday, Feb. 16 at 7:30 p.m. The cost to attend is $300, and the virtual workshop is limited to 75 participants. Additional details and a registration link can be found here.

Police at about 6:15 p.m. on Jan. 22 responded to 151 Butler Lane—a home that made news in November when authorities seized 12 neglected dogs from it—on a landlord-tenant dispute regarding security camera placement in common areas of the dwelling.

Finally, Catherine Palmer, who turned herself in Nov. 29 on three counts of felony animal cruelty after three puppies were found to have died at the house, pleaded not guilty to the charges and is scheduled to appear again on March 10 in state Superior Court. Her lawyer is Norwalk-based Mark Kratter.