Police say they’re searching for Catherine Palmer and that after she’s arrested, a detailed press release will go out that may include a request for donations. Until then, donations are not needed. “The puppies are being well cared for and are thriving,” according to Police Chief Leon Krolikowski. Inquiries can go to 203-594-3511.

New Canaan Police last week removed 12 dogs from a Butler Lane home and obtained an arrest warrant charging a woman with animal cruelty after three puppies died there due to neglect, records show.

Catherine Palmer, 48, has been operating an illegal pet store while keeping puppies in an unsanitary environment, lying to veterinarians about their health and denying the animals access to medical care, according to an arrest warrant application signed Nov. 12 by state Superior Court Judge John Kavanewsky Jr.

Tipped off in August by tenants in the house at 151 Butler Lane after one of the puppies that Palmer kept penned amid feces and urine in the kitchen became unresponsive, Officer Allyson Halm of the New Canaan Police Department’s Animal Control section learned the following month that three other puppies had died within five days, according to an arrest warrant application. Lab tests later showed two of those puppies died of parvovirus and one had pneumonia, Halm said in an affidavit that’s included as an attachment to a Verified Petition of Animal Neglect and Cruelty filed Nov. 19 in state Superior Court.

The Petition, which seeks to transfer ownership of the seized dogs to the town—two Poodles, one Yorkie and nine Maltese puppies, as well as two Maltese adults, an intact male and female—says in part that the “dogs belonging to Palmer appear to be/have been neglected and/or cruelly treated” in violation of state law “and are subject to imminent harm while in Palmer’s custody.”

Halm and New Canaan Police Officer Emily Clark responded to the initial complaint on Aug. 12, the affidavit said. There, they were met by two tenants. One of them, who had been living in the house since November 2019, “was holding a small white puppy that that was unresponsive,” according to Halm’s affidavit, and said she’d texted Palmer about calling the police regarding the sick puppy.

“[The tenant] indicated that Palmer does not reside at the Butler Lane address, however does leave puppies there routinely,” the affidavit said. “[The tenant] stated that the puppy she was holding was not in the house when she went to bed. Both [tenants] believed Palmer brought the puppy in during the night, switching it with one of the five healthy puppies that were there. [One of the tenants] stated the sick puppy was much smaller than the original five.”

Palmer arrived “and became defensive when [the tenant] questioned where the sick puppy came from,” the affidavit said.

“Palmer denied switching puppies. At that time I advised Palmer that the puppy needed immediate veterinary care. Palmer left the scene claiming she would take it to her veterinarian at United Veterinary Center in Norwalk.”

While in the house, Halm said she and Clark “observed three small white fluffy puppies approximately 9-12 weeks of age in a gated area of the kitchen and two small white adult dogs.”

“There was feces and urine covering the floors,” the affidavit said. “A bowl of dry food and water was visible. Conditions on the floor and walls were unsanitary for both the dogs and the tenants who resided there.”

The tenants told police that they pay Palmer monthly rent, though there’s no contractual arrangement for them “to care for the continuous flow of puppies.”

They “claimed they would clean up after the puppies because Palmer was never there to provide care and they felt badly for the neglected dogs,” the affidavit said. “They further claimed that if they didn’t provide food and water frequently the puppies would suffer. Based on experience and training, affiant Halm knows puppies under the age of six months require a minimum of three wholesome meals a day ensuring each animal gets their share and that they live in a clean environment.”

Cruelty to animals is a felony offense, under state law, and first-time offenders face up to $1,000 in fines or one year in jail, or both. Palmer, who lives in a downtown Greenwich apartment while renting out the New Canaan house, has no prior convictions, according to Connecticut Judicial Branch records. 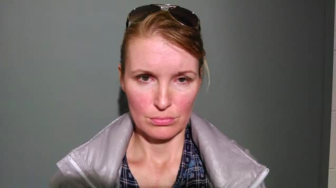 Catherine Palmer at the time of her 2014 arrest. Mugshot courtesy of the New Canaan Police Department

She’d been arrested in June 2014 and charged with risk of injury to a minor after her 7-year-old son fractured his skull after falling off his scooter. The charge appears to have been dismissed, possibly after Palmer was granted and completed “accelerated rehabilitation,” a form of parole.

The Butler Lane house, a four-bedroom Colonial on one acre, has been owned by the same family since it was built in 1975, tax records show. It’s located in the heart of the quiet “South of the Y” neighborhood. A man who lives across the street appeared to reference Palmer’s house in complaining to the town two summers ago about a woman renting it to transients through Airbnb.

Lying to the vet

That same August day that police went to Butler Lane house, Halm contacted Palmer’s Norwalk vet to follow up on the sick white puppy, Gracie. Reviewing his notes, the vet said Palmer had brought Grace in. Palmer told the vet that “the puppy ‘Grace’ had a hypoglycemic episode and responded well to supportive care at home,” Halm said, citing her interview with the vet. Yet Halm herself had “observed the puppy to be unresponsive when it left the residence with Palmer.”

“The doctor’s notes further indicated that the puppy had an abnormal exam, a low temperature, was thin and pale,” Halm said in the affidavit.

That afternoon, Palmer left Halm a voicemail message “stating ‘Gracie’ was fine and there was nothing to worry about,” the affidavit said.

“I left Palmer a voicemail requesting to speak to her further,” Halm said. “Palmer never returned the call.”

While police were inside the house, the tenants provided them with paperwork “that indicated there were multiple sources for purchasing puppies around the country, copies of vaccine records with no veterinarian information, contracts and copies of the Bill of Sales,” Halm said in the arrest warrant application.

As she left the property, Halm found additional paperwork that amounted to “more evidence of puppy broker contracts, registration forms and handwritten records, indicating Palmer was importing puppies and operating a pet store without a license,” the affidavit said.

One of the tenants later emailed Halm saying that as of Nov. 12 there were 12 dogs in the house, including 10 puppies “that Palmer has brought to the house and left for [the tenant] to care for them by herself.”

“Palmer dropped off two new Maltese puppies as recently as Nov. 11,” the affidavit said. “[The tenant] further stated she will be moving out of the residence in the near future and fears more puppies will die. That the conditions for the dogs will deteriorate quickly in light of Palmer’s complete absence and neglect of care.”

During the neglect investigation, Halm learned that Palmer on Aug. 25 hired a woman to clean up after the puppies.

At that time, there were four puppies and two adult dogs in the house, the affidavit said. The cleaner “stated she only had phone contact with Palmer and that Palmer requested before and after photos to ensure the cleaning was done.”

“Palmer would often reschedule her, claiming she was in town and that she could care for the puppies,” the affidavit said. The cleaner added “that when she was scheduled to clean it appeared that the area where the puppies were confined had not been cleaned at all or [one of the tenants] had cleaned.”

“In short it appeared that Palmer did not care for the puppies during [the cleaner’s] absence,” the affidavit said.

On Sept. 19 one of the puppies, Zoe, “stopped eating and had bloody diarrhea,” the cleaner told police. The cleaner then learned from one of the tenants in the house that a different puppy, Buddy, had died Sept. 16 and been buried in the backyard. The cleaner contacted Palmer and was told she could take Zoe to an emergency veterinary hospital in Norwalk. There, the puppy tested positive for parvovirus.

“Palmer was aware that ‘Buddy’ had died earlier in the week without medical attention,” Halm said in the affidavit.

A vet at the Norwalk animal hospital “spoke to Palmer by phone stating that ‘Zoe’ needed hospitalization and would most likely die without intensive care.”

The cleaner “requested that Zoe be euthanized rather than die slowly,” the affidavit said. “Palmer declined and the puppy was released to [the cleaner] with oral medications,” against medical advice.

That same day, one of the tenants notified Palmer that another puppy, Winter, “was showing the same symptoms as Zoe.”

“Palmer suggested giving Winter a dose of Zoe’s medications and that she would be back on Tuesday,” the affidavit said. “Zoe died on Sunday night Sept. 20 and Winter died early morning on Monday, Sept. 21.”

It wasn’t immediately clear whether the warrant yet has been served on Palmer. She resides in apartment 5B at 4 Lafayette Court in Greenwich, according to court documents. (She bought the apartment in April 2014 for $541,550, records show, and a person with the same name bought a multifamily dwelling on Prospect Street in Greenwich last March for $875,000, records show.) The signed warrant includes a provision that she possess no animals.

According to the affidavit, surviving puppies now are at the town’s Animal Control shelter, which occupies about 800 square feet in a non-insulated former incinerator building at the Transfer Station. Two years ago, Selectman Nick Williams said it’s not suitable to house dogs and other animals, calling it a “dump within a dump.” First Selectman Kevin Moynihan one year ago pushed back on a proposed public-private partnership to create a new shelter, effectively scuttling the effort by calling for further study.

The town is represented in the civil matter by lawyers from Westport-based Berchem & Moses. The firm is paid a monthly retainer of $8,500 and  $235 per hour. Dog neglect cases are unusual in New Canaan. Animal Control investigated one such report on Devonwood Lane four years ago.