Already at the center of a recently closed neglect investigation, a Devonwood Lane dog has been getting off-property and roaming his neighborhood, according to police. 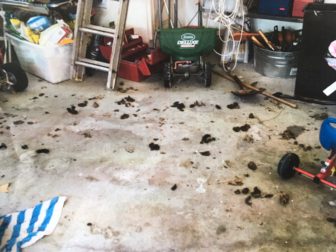 A photo shows the interior of the garage at the home where a puppy is said to have been seen consistently among his own feces and urine. The garage has been cleaned and the puppy reported healthy, closing a dog neglect investigation, according to the Animal Control section of the New Canaan Police Department.

The repeated roaming incidents came to a head recently when members of the New Canaan Police Department’s Animal Control section came upon the young Bernese Mountain Dog while following up on a separate incident on Devonwood, according to a police report obtained by NewCanaanite.com following a Freedom of Information request.

At about 2:30 p.m. on July 13—a Thursday—Officer Allyson Halm, the head of Animal Control, returned a different dog who had somehow got off-property and roamed to a neighboring street back to its Devonwood Lane home, according to the incident report.

“While on the property a Bernese Mt. Dog came bounding up to me, at which time [a neighbor] indicated it was a neighborhood dog that was always loose,” according to Halm’s statement in the report.

The animal had no tags or ID and was impounded to the NCPD Animal Control shelter so he was secured and provided water, the report said.

On returning to headquarters, Halm found that she had received a complaint on June 21 regarding a Bernese Mountain Dog belonging to the owner of 107 Devonwood Lane.

She left a message for the owner, saying an infraction summons would be issued for allowing a dog to roam and failure to license, the report said.

The dog, named ‘Raleigh,’ already is known to police.

In the spring, police investigated a complaint brought by a garbage man that the animal was living in a urine- and feces-covered garage.

Despite photographic evidence of the unsanitary conditions, the homeowner had told police that his dog is well taken care of and also said at the time—this is in April—that he had just acquired the Bernese puppy and would license him soon, according to police. That garage later was cleaned up and the neglect case closed, police have said.

Yet the dog apparently never was licensed. Also, following the June 21 roaming complaint, Animal Control officers left voicemails for Raleigh’s owners on June 22 and 23, and received no response, according to the incident report. Police also received no response from the owner—Kevin Smith—in issuing a written warning to him on July 5 for allowing a dog to roam, nuisance dog and failure to license, the report said.

Smith himself received the infraction summons and paid a $15 impound fee in collecting Raleigh from police at about 6:11 p.m. on July 13, the same day he was found on the neighbor’s property, according to the incident report.

Halm told Smith on July 25 that Raleigh must be licensed with the town by Aug. 1. It wasn’t clear from the report whether the dog yet has been licensed.

13 thoughts on “Police: Owner of Dog, Subject of Neglect Investigation, Nonresponsive to New Complaints of Roaming”