New Canaan Fire Department officials at about 11:15 a.m. on Monday responded to a request from Officer Allyson Halm—head of the New Canaan Police Department’s Animal Control section—to assist in corralling a baby deer that had become trapped in a backyard on Millport Avenue. 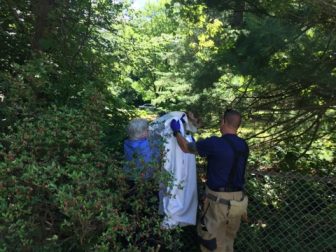 Halm said the firefighters were highly responsive and helpful, and the animal was freed.

The Board of Selectmen on Tuesday approved a contract between the Parks Department and Karl Chevrolet for two trucks: a new low-boy that will cost a net of $50,644 and a new pickup truck that will cost $41,670. Those costs reflect what officials called generous trade-in price discounts from the local dealership. “I think the Karls are being very nice to us,” First Selectman Rob Mallozzi said. Karl Chevy turns 90 this year. The company sold 34 new and 38 used cars in 1927.

Republican challenger for the seat of selectman, Christa Kenin, has raised $3,350 toward a $10,000 goal, according to her online fundraising page for the election campaign. She’s challenging incumbent Republican selectman Nick Williams, and the pair faced off during a Republican Town Committee debate on Tuesday night. The second RTC debate is scheduled for July 12 at Town Hall. The caucus is to start at 5:30 p.m. on July 18 at New Canaan High School. 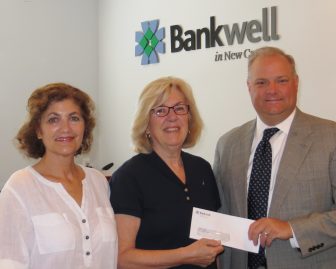 Bankwell recently donated $2,500 to New Canaan-based Arts for Healing, a nonprofit organization that serves the special needs population of children and adults living with communication disorders through integrated music therapy and art therapy. 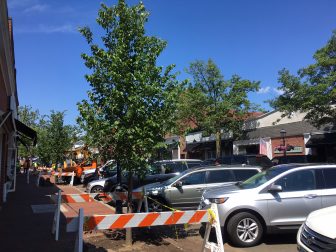 The owner of Pauley Tree & Lawn Care, Horan also has seen to the the planting of American elms in vacant “tree squares” in front of the Playhouse and on Park Street near the train station.

Walter Stewart’s Market is saluting three prized workers at the family-owned and operated Elm Street store: Graduating seniors who have demonstrated both a strong work ethic and a professional attitude toward their customer service duties, according to store management. 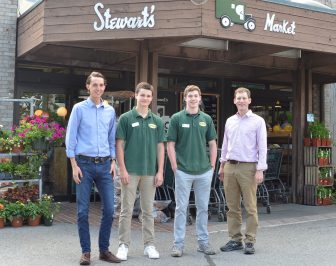 Here’s a look at New Canaan High School students participating in Rams athletics for the academic year just ended. These figures were presented to the Board of Education by NCHS Athletic Director Jay Egan at its June 19 meeting.

New Canaan Police at about 9:57 p.m. on Tuesday night cited a 21-year-old Stamford woman for possession of drug paraphernalia. She ran a stop sign at Jelliff Mill Road and Ponus Ridge and an officer during a subsequent stop found a pipe and rolling papers in the car.

The following 10 New Canaanites will cycle 192 miles on Aug. 5 and 6 in the 2017 Pan-Mass Challenge, an effort to raise $48 million for cancer research and treatment at Dana-Farber Cancer Institute in Boston: 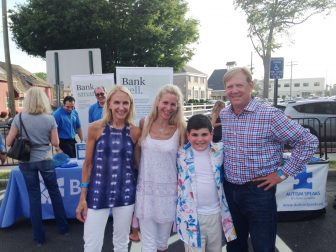 Bankwell, a season sponsor of the Fairfield Theatre Company, is matching FTC $25 donations dollar-for-dollar from July 1 to 15 for every membership sold to support the organization Autism Speaks.

The advocacy organization sponsors autism research and conducts awareness and outreach activities aimed at families, governments, and the public.