We met Phoebe Feiner and her mom, Karen, while talking last Friday to the owners of newly opened Sorelle Gallery on Main Street.

They came in together—and we soon found out that Karen, who works in the area, brings Phoebe with her to work and is by the dog’s side at pretty much all times (except when the sitter comes to take Phoebe home for dinner, served at 5 p.m. sharp.) 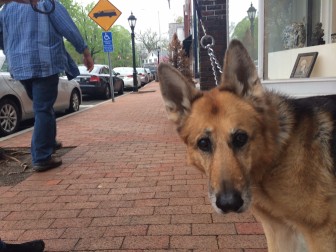 Phoebe Feiner of New Canaan and Manhattan. Here she is on Main Street. Credit: Michael Dinan

The New Canaan resident was kind enough to talk to us about Phoebe, who is a 13.5-year-old German shepherd, for this our “New Canine-ites” series where we profile local dogs. Karen is able to articulate what many New Canaan dog owners feel about their pets, so we’re transcribing our exchange here in full.

New Canaanite: So Phoebe is 13 years old, you said.

Karen Feiner: She’s my fifth German shepherd—and I’ve had more than one at a time, so I don’t want you guys to think I’m 50,000 years old here. Interestingly enough, when my last one died, I said to my trainer, ‘How am I ever going to get another one like that?’ And she said to me, and I’ll never forget this, she said, ‘Well, haven’t all your dogs been like that?’ And I said, ‘Well, yes, I’ve just been lucky.’ She said, ‘No, you’re not lucky. It’s just your relationship with the dog.’ She said, ‘Trust me’—I’ll never forget her saying this—she said, ‘Trust me, I’ve seen many a face of a hallow-eyed dog,’ meaning there’s nothing behind the eyes. This dog is when I first got her, she could care less about me because she didn’t really know me, as a puppy. Then all of the sudden, the relationship just built and she just cannot breathe air if I’m not in it. And that’s not really healthy for her. She’s never been aggressive. She’s a little dog-aggressive, but she’s never shown her teeth at people. Loves children, loves babies. All my shepherds have been that way. But I do believe that if anybody tried to hurt me, she would kill them. I mean kill them.

Why German shepherds? What is it about the breed for you?

First of all, they’re very smart and they know that somebody has to be the alpha dog, somebody has to be the boss. And they really would prefer that it is you. But if it’s not you, it’s going to be them. So you have to teach them at a very young age, who really is the alpha dog in the entire family. You really do. And then they’re happier. They’re more comfortable. But they are just very, very, very connected to the people who take care of them and love them.

Does she come to work with you every day?

What does she like to do around town? I assume she doesn’t like to go to Spencer’s Run if she sometimes doesn’t— 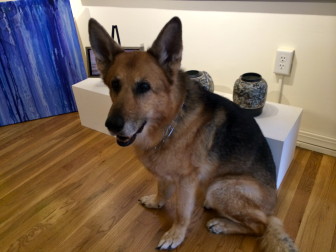 OK. What does she like, Main Street? Elm Street? What?

Well, she likes grass, wherever she is on grass. And to be honest, as long as she’s with me, she doesn’t care where she is or what she’s doing, as you can see. [Phoebe was laying down, looking through the glass door at Sorelle Gallery on Main Street, a favorite hangout.]

Who is her vet?

We come from the city, so her vet is actually Rebecca Campbell, in the city.

Rebecca Campbell in the city. So you have homes in both Manhattan and New Canaan.

OK. What kind of dog food does she eat?

She eats the raw food diet, which is Aunt Jeni’s raw food, but I actually cook it.

I cook it a little bit because it’s real food. I’ve never given her dog food in her entire life, because I was convinced, my last dog was on this great dog food, she died just shy of 10 years old of cancer.

My mom, two days ago, had to put down her three-year-old Vizsla-Lab-something else mix, he had lymphoma. It had metastasized. There was a lump and another lump by the kidney. It’s devastating. My mom had four dogs, and I have four dogs, too, my wife and I, and we wanted to adopt this dog, Henry, from her. Big strong dog, was almost too much physically for her. Very tough. Can you believe it, three years old? No idea how that happens. Is it pesticides in the air, from neighbors’ lawns?

I started putting organic pesticides on my lawn a couple of years back. The vet said at her last physical that all of her insides are normal. The reason I would never do anything but real food again, is that there are chemicals that they put in that preserve the dog food. And I just think it’s chemicals.

What do you do for deer ticks? Anything?

Do you know that she very rarely if ever has a deer tick. I will put her on the Frontline. I don’t do it all the time.

I don’t either. I worry about my dogs with that.

There is nothing like them. There’s a string from my heart to her heart. There is no question. It’s the only way to describe it. The babysitter is going to come at 4:30 and take her.

The babysitter comes at 4:30 to take her.

You’re like us. You live for the dog. Decisions about vacations, jobs, house. It’s the dog.

It’s interesting, my mom passed away it will be three years. And she, this is really interesting. My mother had a king size bed. We all lived together in the same house, we built a house together, and my mother would sleep on the left-hand side of this big, king-sized bed. Whenever we would go away, my mother would watch her, feed her, whatever. Phoebe, I mean, they’re always welcome on the bed. It’s probably a no-no, but I don’t care.

I don’t care either.

Who cares, right? My mom, when she got very, very ill, had to move into a hospital bed, within her room. And the day that my mother died, you know where this dog went?

On the left-hand side of the bed at the top of the bed where my mother layed. And she stayed there for two days. And after my mother died, she was so depressed. There was a boy, six years old, I had a party instead of a funeral for my mother, and he didn’t really know what was going on, he came up and said, ‘What’s wrong with Phoebe, she seems so sad today?’ And none of us were sad. We were staying partying and whatever. He noticed it in her and said to call the vet. And I, because I knew my mom was going to be dying, said what do I do? I know this dog is very close to my mother, what do I do for the dog? She [the vet] said that she will have a thing of mourning, but she did say, ‘As long as you’re OK, she’s OK. She wouldn’t survive you dying.’ And I thought, ‘Oh my god.’ There is nothing like them.