Seeking to control overtime costs with two officers out on injury leave since last April and another since last month, Police Chief Leon Krolikowski said the department plans to hit pause on a widely praised program that’s seen an officer assigned to the downtown exclusively. 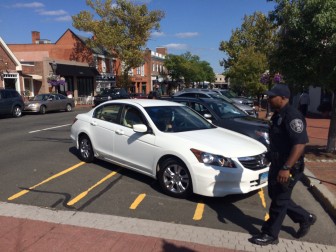 NCPD Community Impact Officer Roy Adams on Sept. 15 instructs an illegally parked motorist to back out of non-spot on Elm Street. The town has since installed bollards in the spot, and motorists now can be seen parking directly in the crosswalk where Adams is standing in this photo. Credit: Michael Dinan

Community Impact Officer Roy Adams since September has been working directly with merchants and boosting police presence in the business district. A role developed following a survey in 2013, the move has won high praise from residents, downtown workers and business leaders.

Yet as the police department reduces its overtime spending, ensuring patrol shifts are fully staffed is a top priority, Krolikowski said Friday while presenting his budget to the Board of Selectmen.

“We are being very careful now, especially with three officers out, we are trying to be fiscally prudent,” he said during the meeting, held in the Training Room at the New Canaan Police Department. “And no doubt I would love to have the program continue forever, but obviously as we feel pressure financially to manage our staff and our budget properly, we may have to pull back services. I hate doing that, but that may be a need.”

Adams is in favor of switching back to patrol,Krolikowski said, and is to be reassigned for February.

The police department is comprised 52 full-time and four part-time officers and support staff members. The chief is seeking an overall increase of about 3.3 percent to his operating budget, to about $5.8 million—see page 44 of this document.

Krolikowski said he is seeking $360,000 in overtime spending for fiscal year 2016—that’s about what the department is on track to spend this year in OT, he said. And though that figure is about 21 percent less than what the police department had spent in OT last fiscal year, the chief said, it still exceeds the current approved OT budget of $274,000.

Selectman Beth Jones praised the CIO program as a “fabulous” communications and public relations plus for the police department.

First Selectman Rob Mallozzi called the CIO program “one of the best things” that the department has done under Krolikowski.

Saying he understood the chief’s decision on the operational side, Mallozzi asked whether Krolikowski and the Police Commission would consider reassigning its school resource officers to the role of CIO when the academic year wraps up in June.

“I just think it would be a shame to lose the great inroads you have made in the community by having someone there, and I would just ask at this level that you folks explore every option to keep that [CIO assignment] going for the full year,” Mallozzi said.

Krolikowski said he planned to do that.

“No doubt in June once the officers come back to their shifts, we will be in good shape, and hopefully the two officers off now will be back or replaced, and then we will be able to continue that program,” the chief said. “It is a high priority program, it’s a great success and just timing-wise it is one of those things that we are going to have to reassess when we can.”