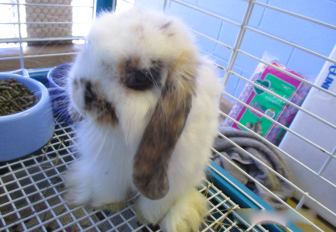 This bunny was found abandoned at the dump Oct. 1. Photo courtesy of the New Canaan Police Department

The animal was “found hiding behind a resident’s garbage cans, thin and matted,” Halm said. 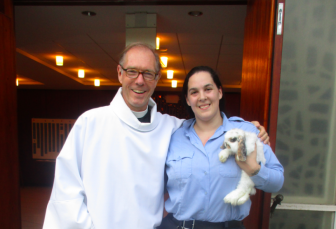 L-R: The Rev. Peter Walsh of St. Mark’s Episcopal Church with NCPD Animal Control Officer Jillian Bosch after the Blessing of the Animals on Oct. 7, 2018. Photo courtesy of the New Canaan Police Department

On Sunday, Animal Control Officer Jillian Bosch brought the bunny to the Blessing of the Animals at St. Mark’s Episcopal Church. A pet reception followed the special service.

The rabbit will become available for adoption at the end of this week, and authorities are seeking a family that has experience with the animals.