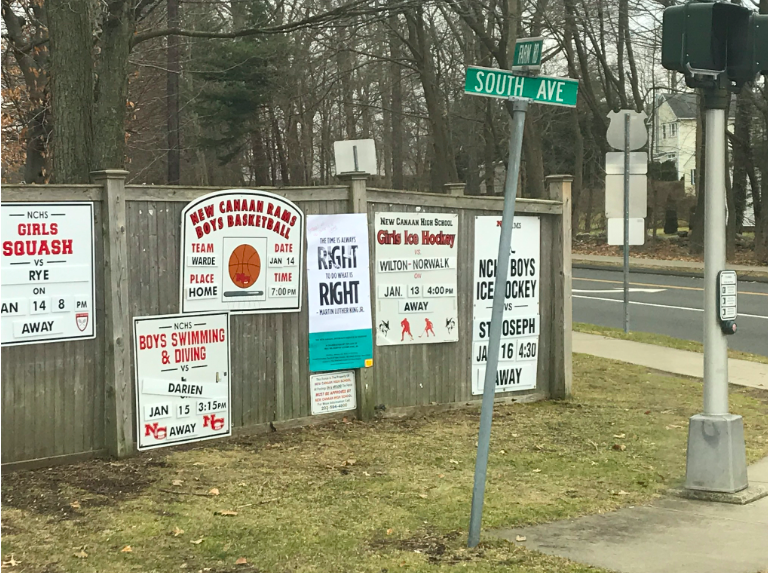 The sign can be seen in the center of the notice board. It quotes the Rev. Dr. Martin Luther King Jr.: "The time is always right to do what is right." Credit: Marie Maguire

New Canaan Police are investigating the removal of two posters promoting a service to be held Monday in memory of the Rev. Dr. Martin Luther King Jr.

Placed Jan. 7 on notice boards at the train station and at the intersection of South Avenue and Farm Road, the posters were found to have been removed five days later, according to Jennifer Zonis, president of the Interfaith Council of New Canaan, the organization that presents remembrance service on Martin Luther King Jr. Day.

The Council had obtained permits from the town prior to placing the posters on the notice boards, and each was marked with an orange sticker designating the approval, Zonis told NewCanaanite.com. Zonis said she looked into whether the posters had been blown away or removed by mistake prior to reporting the larceny to police, and discovered in communicating with past Council leaders that the same thing had happened multiple times in recent years.

Vonis said that when she learned this wasn’t the first time it happened, she grew “concerned that this is ill will.”

Members of the Council are “heartbroken and upset and concerned and also frustrated,” Zonis said.

Asked about the incident, Police Lt. Jason Ferraro confirmed that the NCPD Patrol Division took a larceny complaint and is investigating.

The two posters cost about $118 together, Zonis said, and two more have been purchased to replace them and now are back on the notice boards. The money comes out of the Council’s modest budget. Funds collected during the offering at the service go to local causes—this year, beneficiary organizations include the ABC House of New Canaan and New Canaan Food Pantry.

The interfaith service celebrating King’s life is to be held 10:30 to 11:30 a.m. Monday at United Methodist Church. The free service this year will feature as guest speaker the Rev. Christian Peele, who has served as executive minister of Institutional Advancement at the Riverside Church in New York City, as well as in the White House.