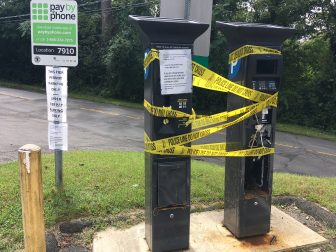 One of the machines appears to have been completely gutted. The machines are wrapped in police tape. A sign on one of them urges motorists to use a pay-by-phone app.

The train station stands to gain spaces as First Selectman Kevin Moynihan negotiates a nominal lease with the state for an area along Route 106 that will be converted into parking.

As of this week, 72 people were on the waiting list for permits at Talmadge Hill Train Station, with a wait of about six months.