Lauren Schwarmann’s only intention in entering Kiwanis Park last Friday morning was to take her two little boys, 3-year-old Lucas and 2-year-old Reece, to the small playground, a family favorite. 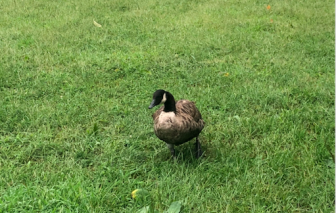 The goose during the rescue operation, a joint effort of Lauren Schwarmann and Officer Allyson Halm of the New Canaan Police Department’s Animal Control section. Photo published with permission from its owner

Her plans changed quickly when, after pulling her truck into the Old Norwalk Road park, she spotted what appeared to be a dog or cat under attack by a pair of red-tailed hawks.

“All I saw was wings everywhere,” Schwarmann recalled. “It was in the middle of the field and I quickly drove the car up to it and there were two hawks landing on him. There wings were on him. He was just laying on the ground, he had his wings spread and he was squawking, so I thought he was injured.”

‘He’ being a young male Canada goose that first sighted at Lakeview Cemetery weeks ago with its feet bound by fishing line, officials said. 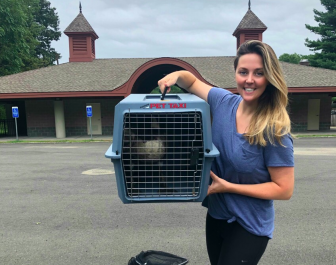 Lauren Schwarmann with the rescued goose at Kiwanis Park, Sept. 7, 2018. Photo published with permission from its owner.

Though it wasn’t easy, requiring patience as well as a long-handled net—the goose for a time escaped to the manmade pond at Kiwanis, then back to the field—the women eventually corralled the bird and he’s now under the care of the South Wilton Veterinary Group.

According to Halm, one leg is critically injured and the vets need more time to see if it will heal properly so he can be released.

Certainly, Halm said, the goose would be far worse off if not for Schwarmann’s conscientiousness and swift action.

A self-professed animal lover, Schwarmann, a West Norwalk resident whose kids attend preschool at the New Canaan Nature Center, said she has rescued dozens of injured animals in her life, including turtles and raccoons.

“I’ve been doing this my whole life,” she said. “When I told all my friends and family they were like, ‘Of course you saved a goose.’ ”

Meanwhile, her boys were “very calm” and “perfectly fine” throughout the two-hour ordeal, Schwarmann said.

“I had them out of the car, they were excited to save the goose, and excited to see a police officer because she was in her uniform,” she said.

Now Schwarmann said she’s hoping for a full recovery for the rescued goose.

“It was heartbreaking,” she said of the injured animal’s condition. “I didn’t know what to do. The whole hawk situation was crazy.”

Schwarmann added: “I’m really glad it worked out, that I went there that day. My mom says I was the right person to come into his life that morning.”