Police are seeking residents’ help in locating the owner of a senior cat that last week wandered into a New Canaan home. 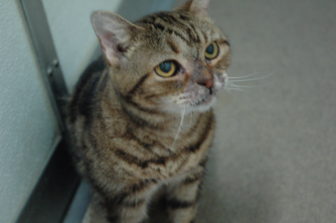 “It was in pretty rough shape—disheveled and thin,” Halm said of the cat, whose sex has not been determined because the animal up to now appeared rather skittish.

After spending 24 hours at Grove Street Veterinary, the animal came rallied and now is being kept at the Animal Control shelter at the Transfer Station, Halm said.

The cat had been micro-chipped but the chip itself never was registered, and relays the information that the cat was “purchased” in 2005 but little else, Halm said.