Old Stamford Road has been reopened to motor vehicle traffic, according to police.

Old Stamford Road is closed to all traffic between Lapham Road and Weed Street after a tractor-trailer struck the railroad overpass Monday afternoon. 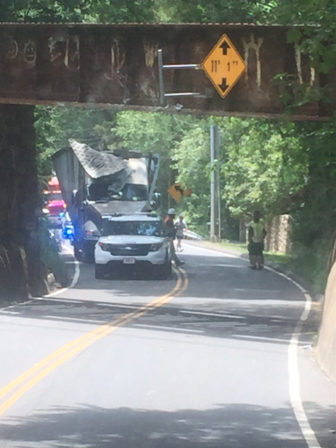 A tractor-trailer struck the railroad overpass on Route 106 in New Canaan on Monday, June 27, 2016. Photo published with permission from its owner

It happened shortly after 12:30 p.m. when a northbound vehicle struck the Metro-North Railroad overpass and it will take about five hours to re-open the busy state road, according to the New Canaan Police Department.

Firefighters, police and EMTs with the New Canaan Volunteer Ambulance Corps responded to the scene. No serious injurious were incurred and no other vehicles were involved in the collision, according to fire officials. 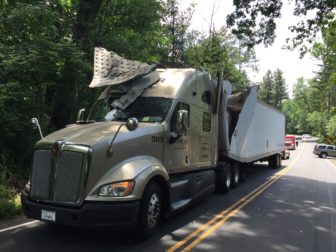 This tractor-trailer struck the railroad overpass on Route 106 in New Canaan. Photo published with permission from its owner

A heavy-duty wrecker was on its way to Route 106/Old Stamford Road shortly after 1 p.m. and, given the size of the tractor-trailer, would take some time in order to extricate the vehicle, fire officials said.

Metro-North officials are responsible for dispatching workers to inspect the bridge and make sure it’s OK for trains to span.