With a successful Sidewalk Sales now in hand, downtown New Canaan is poised for its first extended installment of the Pop Up Park at South and Elm. 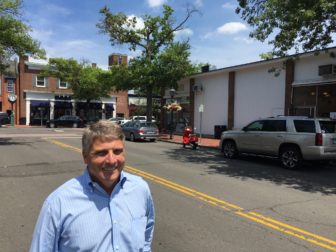 This year, the Pop Up Park—to be in place continuously from Aug. 5 to 28, following town approval—will offer not only new umbrellas and seating but a new feature every Thursday evening: Live music.

The ‘Thursday Night Music’ series, overseen by New Canaan Music owner Phil Williams, will run 6 to 8 p.m. on Aug. 11, 18 and 25 and feature “a good cross-section of our music community here,” he said.

“We’ll have some local talent, New Canaan college kids and an adult band as well,” said Williams, a New Canaan Chamber of Commerce board member whose store regularly supports performing arts productions at Saxe and the high school. “These are people we’ve met through the store—some are employees, some are customers, some are instructors. It’s a nice time of day to be out listening to music.” 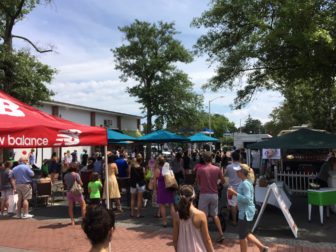 The Pop Up Park was set up during the 2016 New Canaan Sidewalk Sale. Credit: Michael Dinan

Though the Pop Up Park this summer will offer plenty of activities for downtown visitors—plans call for things to do around the Olympics, a mom’s group organizing low-key outdoor playing, mini-golf and more live music during the Taste of the Town Stroll—“there will plenty of downtime, too,” said Tucker Murphy, a founder of the volunteer committee that oversees the makeshift park.

“People can just go in and read a book,” she said. “We want everyone to have a place where they can bring people to town, and it’s for someone who wants to sit and hang out while others can go and do their thing. We want it to be a whole family-geared area.”

The town has agreed to support the Pop Up Park this year by helping out with garbage pickup, and allowing it to remain in place through the weekdays in August that it runs will unburden the park’s volunteers of onerous set-up and breakdown.

The decision to re-boot the Pop Up Park follows a summer that saw it put off after a group of merchants expressed concerns about its effects on traffic, parking, business and aesthetics. Those concerns have been addressed and merchants have been invited to help organize the Pop Up Park, committee members have said.

If the three weeks in August go well, the committee may seek to expand the Pop Up Park “season” in the summer of 2017, officials said.

One thought on “Pop Up Park To Launch Aug. 5, Run Continuously for Three Weeks; ‘Thursday Night Music’ New This Year”