Police on Wednesday arrested a 30-year-old Newark, N.J. man following a pre-dawn foot pursuit and multiple crashes, including one involving a stolen vehicle, that ranged across a wide swath of New Canaan for more than one hour. 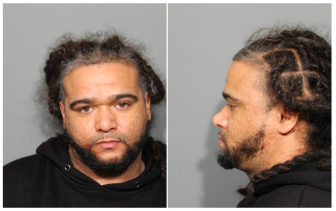 At about 4:46 a.m. on Jan. 27, officers were dispatched to Urban Street on a report of two men entering and searching vehicles on the street, according to police.

The men were operating a red vehicle with a loud exhaust, according to a police report. Responding officers saw the vehicle—an older model Subaru with New Jersey plates—driving northbound on Smith Ridge Road, the report said. Authorities later determined that the vehicle had itself been stolen out of New Jersey earlier in the night, it said.

Officers tracked the Subaru to Canoe Hill Road, where it had crashed into a tree, its occupants fleeing the scene, police said. A K-9 unit from the Norwalk Police Department responded to the scene to help track the suspects, the report said.

Police followed the footprints in the snow from the Canoe Hill Road crash near Rosebrook Road to Brushy Ridge Road, all on the east side of town. Investigating officers determined that at least one of the suspects, Cruz, tried to enter several vehicles on Brushy Ridge Road and ultimately stolen a BMW SUV from a residence on the street, police said. The vehicle was unlocked, its keys left inside, the report said. Officers saw it travel past them, nearly striking officers at the intersection of Brushy Ridge Road and Route 123, the report said.

The BMW later was located after crashing in the area of West Road near Oenoke Ridge, police said. Again police found footprints in the snow  and followed them to a Lambert Road residential property, where Cruz was found hiding behind a bush, the report said. He ran off after police told him to surrender, and was taken into custody after a brief foot chase, the report said.

He subsequently was taken to New Canaan Police headquarters. Bond originally was set at $100,000, yet the state bail commissioner lowered it to $10,000, police said, meaning Cruz was able to secure release after posing 10% of that figure or $1,000. He was scheduled to appear Thursday in state Superior Court.

The second suspect was not located, police said, and has not yet been identified.

“The New Canaan Police have continued for multiple years through media and social media campaigns to remind residents to lock their vehicles and remove valuables,” police said in their report. “We continue to ask the public to consider this incident as an example of how brazen and reckless these criminals can be. Lock your cars.”

In 2020, larcenies from vehicles increased by 50% in New Canaan, from 32 to 48, officials have said. And stolen vehicles nearly tripled from 10 to 27 last year, officials said.