Town officials on Monday approved funds for a project at Waveny that ultimately will bury underground the power lines that now run conspicuously over the pond and cornfields—focus areas for a nonprofit organization dedicated to the park. 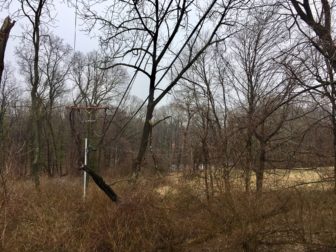 The power line running alongside the sledding hill toward the pond at Waveny, then out toward the cornfields. Credit: Michael Dinan

The approximately $46,000 approved for three contracts by the Board of Selectmen at a special meeting—following a $21,000 contract with Eversource that the board approved last week—are designed to kickstart work as part of a public-private partnership between town and Waveny Park Conservancy, officials said.

“The idea was to get this in place so that it does not disrupt the park come July and August,” First Selectman Rob Mallozzi said at a meeting, referring to Eversource’s work of bringing in new electrical service.

The project will see about 800 new feet of electrical cable go in underground, as well as installation of three new transformers and an overall system upgrade, according to Bill Oestmann, the New Canaan Department of Public Works’ superintendent of buildings.

The work should take less than one month, Oestmann said.

“I definitely want to get it done before the end of April, that is the goal,” he said. “We don’t want to make a big muddy mess either. There’s a lot of lot of things going on up there, so I want to get these guys in and out.”