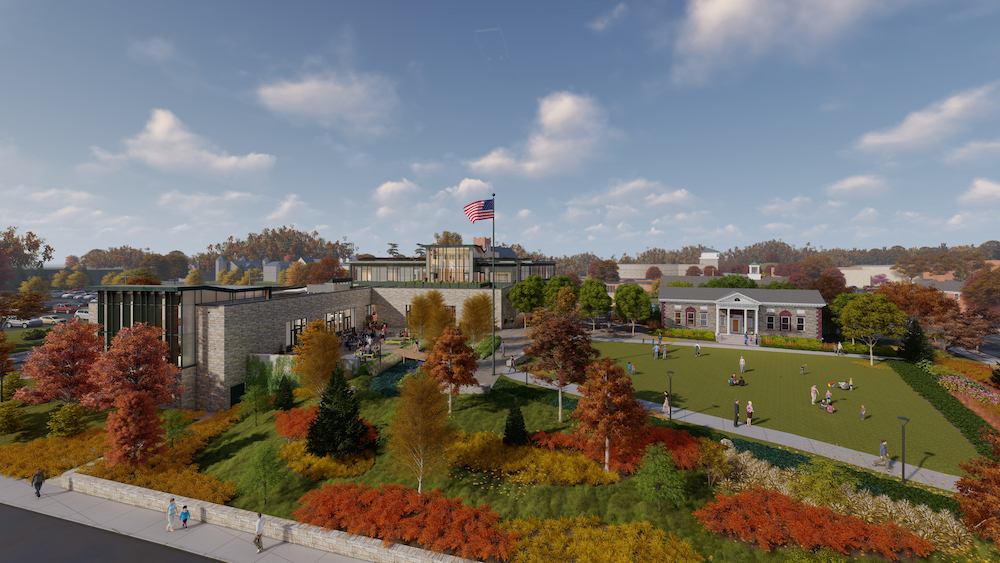 The Planning & Zoning Commission at its most recent regular meeting voted unanimously to approve New Canaan Library’s plan to relocate salvageable portions of the original 1913 building to the western border of its downtown campus.

P&Z at its Nov. 15 meeting voted 10-0 in favor of a text amendment allowing the legacy building to be relocated within five feet of the property line that the library shares with the Gulf station—originally set out in the proposed text amendment as 20 feet—as well as to allow the height of the building to stand at 25 feet in lieu of 15 feet.

The Commission also voted in favor of an amended site plan presented by the library regarding the preservation project, with conditions on use of the legacy building as a public space, specifics on landscaping approved by the town planner, preservation of existing frescoes and resolving stormwater drainage issues flagged by the town engineer.

“I would see this as being helpful in preserving the remaining 1913 building on site and also assisting in maintaining larger open space on the library site which will provide benefits to the town,” Commissioner John Kriz said at the meeting, held at Town Hall and via videoconference.

Two commissioners—Ward and Radman—said they were “reluctant” in their votes.

Rather unexpectedly, Ward asked whether the question of keeping the 1913 building had been closed. Some commissioners responded that it would be unfair to the library for P&Z to change its approval of the preservation plan from last December.

Radman said there’s been “chatter” in town regarding the P&Z’s acceptance or reluctance of the library project, though the entire Commission supports the new building. Radman said the library could have taken opportunities to preserve the legacy building in place, or in situ, “but they decided not to go that route,” so it’s “water under the bridge.”

“I think all of us as a Commission, as a whole, could have been a lot more firm on our position of historic preservation a year-and-a-half ago,” Radman said.

He referred to P&Z’s July 2021 approval of the overall rebuilding plan.

Goodwin said he disagreed with Radman’s summary of events.

“I have been doing my homework on preservation, too, and preservation does not have to be in situ,” Goodwin said. “There are a lot of architects who will say that. So I don’t think it’s clear-cut. I think there also were some realities that entered into this situation before this landed in front of us and I’m still asking why our friends in other public bodies who are controlling the funding were like, ‘Let’s give it to P&Z.’ And they gave it to P&Z and all the sudden they’re yelling at P&Z. Well if you’re yelling at P&Z, why didn’t you make a decision?” (One of the library’s opponents who addressed the Commission, at length, was Town Councilman Penny Young.)

The new New Canaan Library is on track for a first-quarter opening in 2023, officials have said.

Commissioners during the meeting asked the library’s land use attorney, Brian Smith of Robinson + Cole, and architect Mark Herter of Centerbrook Architects, if the organization would consider moveable partitions or sliding glass doors in the legacy building (it’s possible, though there are some structural bracings needed), whether the cultural space will retain its finishing work (there are code upgrades and fuller hazardous materials evaluations still needed), whether there will be an at-grade entrance in the back (yes), whether a new disabled entrance will be added (yes), what is the need for office space in the legacy building (the library must evaluate the use of the structure for the future), whether the office space could be better defined as ‘flex space’ (yes), whether the new walls that will enclose the legacy building will be similar in materials to the originals (yes), whether there will be a basement (no), whether there will be an attic (yes), how it likely will be accessed (through a hatch in the storage area), what the distance will be between the building and the property line to the west (varying from seven to eight feet), whether plantings will go in there (a fence in the back and plantings on the north and south sides), whether the positioning of the building with respect to the property line has changed since the December 2021 approval (yes the plans are consistent though the original regulation amendment was for a 20-foot setback), why the 20 feet couldn’t be met (that would change the site layout substantially in a way that doesn’t work for the library and its mission), whether problems with satisfying drainage problems have been resolved with the town engineer (the bioswale has changed though more follow-up is required), what kind of fence will go behind the legacy building (it will be appropriate though there are no specifics yet), whether the fence that currently exists is on the library’s property or the gas station’s (the current fence will be removed if it’s on library property and replaced), whether the concept is to install a nicely constructed tall fence to screen the gas station (yes, though it cannot exceed six feet under the regulations), how long construction would take (the goal would be for it to be open in October 2023), whether the project’s structural engineer has weighed in on the move (yes), whether that firm and the company that will do the move is comfortable with the plan (yes), what month the building will be moved to meet an October ready date (that’s unclear) and whether the legacy building will receive state or federal historic recognition (no).

Some meeting attendees addressing the Commission during the hearing voiced opposition to the plan, saying the planned relocation will diminish the historical and cultural value of the structure, that the community is divided about the proposal, that the library’s vision for the green could be realized without moving the legacy building and that the project does not meet the U.S. Secretary of the Interior’s standards for preservation.

Charles Robinson said he has paid close attention to P&Z’s deliberations on recent 8-30g affordable housing applications in New Canaan. (The Commission has cited public safety concerns in those discussions.)

“I’d like to point out there that it might look hypocritical if the Planning & Zoning Commission voted with no consideration whatsoever to the fire safety elements and public safety elements of putting half of a landmark building as close as possible to a building which is in its current state a fuel depot, a car repair facility,” Robinson said. “Its future state may be an electric car facility with lithium ion and other batteries, which is a serious fire safety concern.”

Others voiced support for the relocation plan, saying those opposed to it are a vocal minority trying to stymie a valuable and necessary project that will benefit the entire town, that the library green has garnered support in the form of hundreds of donations from families and individuals and that the library is already taking on a significant compromise by taking on the preservation and upkeep of the building, which was not in its original plan.

Ian Hobbs, chair of the building committee for the library, said, “Last December, P&Z concluded a thorough process which resulted in a good and fair compromise. The library spent $250,000-plus in good faith on design. I think that all P&Z concerns have been addressed. We are truly excited about keeping the legacy building to a prominent location on the property. I know that a great use is going to be found for the building and if we don’t get an approval and get moving, there will be significant delays and the costs associated with these delays will be substantial. We have lived up to our end of the agreement. I hope that there will be a vote in favor of our plan this evening so we can begin lining up the work necessary to move the building and complete the project.”

Opponents of the library’s rebuilding project began voicing concerns about plans to install a green where the original building sits in public hearings held after the library’s application came into the town in February 2021.

The New Canaan Preservation Alliance sued P&Z weeks after its initial approval that summer, then sued the Commission again in January after the preservation plan was approved. Those administrative appeals are active, with status conferences scheduled for next month, according to Connecticut Judicial Branch records.

About one month after the NCPA its first lawsuit, petitioners sought to challenge the Town Council’s decision to bond $10 million toward the library project. Yet they were unable even to get the signatures needed to force a referendum vote.