Though a state agency has exclusive jurisdiction over applications to erect cell towers on private property, town officials said Tuesday night, New Canaan should try to update its Zoning Regulations such that they urge—if not require—applicants to check in with the local Planning & Zoning Commission so that standards such as setbacks are respected.

New Canaan will have “real headaches” as efforts to improve wireless service move from using public land to private property, P&Z commissioner Laszlo Papp said during the group’s regular meeting, held in a crowded board room at Town Hall.

“I am afraid that we will have a tremendous public outcry … but very little to do because this is going to be the [Connecticut] Siting Council’s business, not the town’s business—a little setback or minor adjustment—and I am not happy to sit here and listen to that kind of an outcry,” Papp said at the meeting, attended by about 40 people, forcing some into a hallway. 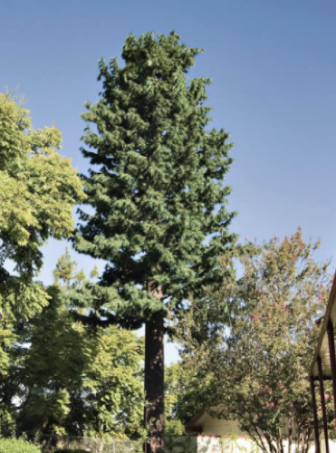 This is what the cell tower planned for a private property at the end of Soundview Lane would look like, according to the property owner.

The comments—addressed to a consultant who is advising the town on updating the telecom facilities section of its Zoning Regulations (see page 157 here)—come on the heels of a Soundview Lane resident disclosing that he’s pursuing what would be the first cell tower on private residential property in New Canaan (others already are installed on private property owned by the Country Club of New Canaan and Silver Hill Hospital).

Keith Richey’s plan—outlined on a newly launched website—calls for a tower with a total height of 90 feet, to be mounted from a base that forms part of a 1,763-square-foot structure inside a 2,310-square-foot area, according to a site plan shared with NewCanaanite.com. According to Richey, a substantial base is required because in opting for the least conspicuous tower—that is, one with the most “branches”—he also is choosing a tower that is most susceptible to high winds. The tower is expected to provide service from a radius roughly equal to the distance from his home to Route 123, he said, addressing service gaps for AT&T and Verizon in the northeast portion of New Canaan, as identified by a consulting firm more than three years ago. Richey said during an interview that he expected two carriers to be able to use the tower and that New Canaan’s ambulance, police and fire services would be able to use it for their emergency communications at no cost. 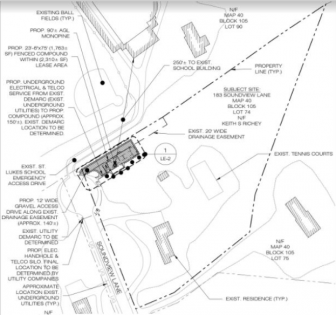 Site plan for the cell tower on Soundview Lane.

He said that the structure would be contained within a stockade fence and set in the woods on his property, screened by trees to be planted and located amid evergreen and deciduous trees, some of which reach 65 feet. Richey lives at the end of the cul-de-sac on Soundview Lane, next to St. Luke’s School, and he said the structure sketched on the site plan would be about 20 feet from the street as well as 20 feet from the property line he shares with the private school. Under the New Canaan Zoning Regulations, accessory structures in the four-acre zone must be set back 50 feet unless a variance is obtained.

Yet—though the Connecticut Siting Council solicits and values input from neighbors and residents during the process (see below)—such rules are not enforceable with respect to applications for permission to build and operate cellular infrastructure on private property, according to Melanie Bachman, the agency’s acting executive director.

Typically, a tower builder teams up with one or more carriers in applying to the Connecticut Siting Council for permission to operate cellular infrastructure on private property, according to Melanie Bachman, the agency’s acting executive director.

Prior to making that application for a “Certificate of Environmental Compatibility and Public Need,” the Council asks that the applicant meet with a town’s “chief elected official,” Bachman said—in New Canaan’s case, First Selectman Kevin Moynihan—to gather up any information related to areas such as wetlands and to see if the municipality “has any location preferences for the tower.”

“And also, the town could request that an applicant present to the public at an informational meeting at their own expense, for the residents and town commissions to get a sense of what is proposed and make recommendations,” Bachman told NewCanaanite.com during an interview.

After gathering up comments from municipal boards and commissions, the Council reviews the application for completeness and then schedules a three-part public hearing for a single designated day, she said. That includes a “field review” on the proposed cell tower site, evidentiary session where the applicant makes a formal presentation and evening public comment session (see FAQ here).

It was a public comment session that last spring derailed inchoate plans to put up cell towers on the west side of New Canaan. An outcry from residents led a town-appointed agency after several years of work to abandon a proposal for cell towers on public park and school grounds.

Moynihan, elected last fall following a campaign where improving cell service emerged as a point of debate, long has said that New Canaan likely must turn to private property in order to boost coverage.

Asked by NewCanaanite.com during a media briefing last Thursday about the prospect of a cell tower on a residential property on Soundview Lane, Moynihan said he would not comment on applications involving private land.

Neighbors who oppose Richey’s plan have been more vocal. A Facebook page dedicated to that opposition materialized quickly, and Richey’s direct neighbor to the south penned an Op-Ed decrying what he called a lack of transparency, and also raised questions about the effects that a cell tower would have on health and property values.

Under a draft proposal from the consultant— Glenn Chalder of Simsbury-based Planimetrics—Section 7.8 of the Zoning Regulations would be expanded, including with wording that notes when an application for a cell tower goes to the Siting Council straightaway (private property) versus after it’s vetted by the town (public).

At Tuesday’s meeting, commissioner Dan Radman asked Chalder to figure out a way to update the Zoning Regulations so that New Canaan is “in a position where an applicant with private land cannot bypass us as a commission or town and go strictly to the Connecticut Siting Council with an application and lease in hand and a plan.”

“How do we establish the sequence and processes where we have input in the plan?” Radman asked.

Chalder noted that there’s a notification requirement for cell tower applicants that includes the town and neighbors, but that he would need to research further the question of just what New Canaan could do with its Zoning Regulations to create the kind of touch point P&Z is seeking.

Referring to P&Z’s desire and the Siting Council’s jurisdiction, Papp said: “I am of the opinion that we should be able to find language that satisfies both. It’s not easy, probably, but I think it can be done and should be done.”

P&Z commissioners said the group should act quickly in order to put the proposed updates to the Zoning Regulations to a public hearing.

Ray Vergati, a regional manager for the tower company that Richey is work with, Homeland Towers, could not be reached comment.