Stand Together Against Racism, or S.T.A.R., is hosting a Juneteenth celebration from 4 to 7 p.m. Sunday at the New Canaan Museum & Historical Society lawn. The event is sponsored by the Historical Society as well as Bankwell, New Canaan Library and NewCanaanite.com. We put some questions to S.T.A.R. founder and town resident Fatou Niang ahead of the celebration. 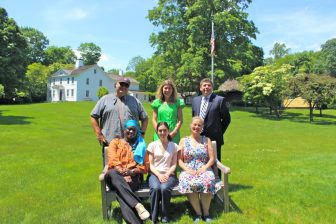 New Canaanite: What prompted your organization, S.T.A.R., to plan for a Juneteenth event this year?

Fatou Niang: For over 150 years, members of the Black community in America have celebrated Juneteenth. Though Lincoln’s Emancipation Proclamation ended the Civil War and Slavery on January 1st, 1863, it wasn’t until June 19th, 1865 that the last of the enslaved people in the United States were granted freedom following Major General Gordon Granger’s arrival in Galveston, Texas. Stand Together Against Racism (S.T.A.R.) is excited to invite all of our friends and neighbors to honor the significance of what is now our newest Federal and State holiday and carry forward this treasured tradition.

Tell us what people can expect to find at the New Canaan Museum & Historical Society campus on Sunday during “Hearts of Freedom”?

We know it’s Father’s Day, which is why this year’s picnic theme is Fatherhood & Joy. This will be a community style picnic where people can bring their own dinners and blankets, and we’ll honor a Juneteenth tradition of eating red foods by providing some yummy drinks and sweets for everyone who attends. We cannot wait for people to see the art created by New Canaan students for this special day, and there will be live music from a beloved local band along with fun activities for families and kids, as well as special guest speakers. We strongly encourage people to come celebrate and dance, as well as to learn more about Juneteenth, S.T.A.R., what we do, and how to get involved—even if you can only stop by for a short time, we hope to see you there!

You created your organization more than two years ago, and S.T.A.R. rose to prominence, in large part, through co-organizing the very well-attended march in New Canaan following the murder of George Floyd. How do you feel S.T.A.R. and its mission have been embraced locally?

Just as the march two years ago was a watershed moment in recognizing our power and ability to bolster our community in times of tragedy and anguish, the overwhelming support S.T.A.R. has received has been deeply nourishing in our quest to ensure every New Canaanite feels like they belong in our beloved town. Not only is it healing to come together and commit (and recommit!) to anti-discrimination work, but the outpouring also helps to sustain us — it keeps us going. After all, the work doesn’t end with us! From the individuals who have expressed gratitude or attended our programming to the partnerships with other New Canaan-based organizations, we’ve been thrilled and uplifted by the solidarity that’s been achieved thus far and are eager to see what lies ahead.

Part of what also followed George Floyd’s murder were updates to the New Canaan Public Schools’ goals and objectives, after you and many others addressed the Board of Education at public meetings in the summer of 2020, and beyond. What is your assessment of the progress the school district has made in realizing those goals?

While we have not seen public statements updating on this progress, nor on defining the actions to be taken to reach the DEI goals, we were pleased to have had the Stand Together Against Racism Award accepted as a new honor for the high school’s annual recognition assembly. We believe that this award reinforces the district’s own stated goals, with its emphasis on ensuring an inclusive environment both in and out of the classroom.

What else would you like to tell our readers about S.T.A.R.?

Becoming an official 501(c)3 non-profit in just over one year was a major milestone for us, and we are dedicated to driving transformative and sustainable social change in our community and beyond with this official designation. After the murder of George Floyd, we stood together as a community, and, as a community, we aim to continue this journey together. Is our path always a walk in the park? Of course not! Sometimes what we learn can be challenging, but the journey itself can be joyful: as we learn, we grow, and as we grow, we build a world where all feel safe, respected, and supported. ​We want to share with everyone the joy of learning and growing both individually and collectively. Each and every one of us is unique, and our uniqueness is an asset when we collaborate as a community. ​​We hope and encourage each and every New Canaanite to join us in fully opening themselves to learning from and about those who are different in whichever form that difference shows.