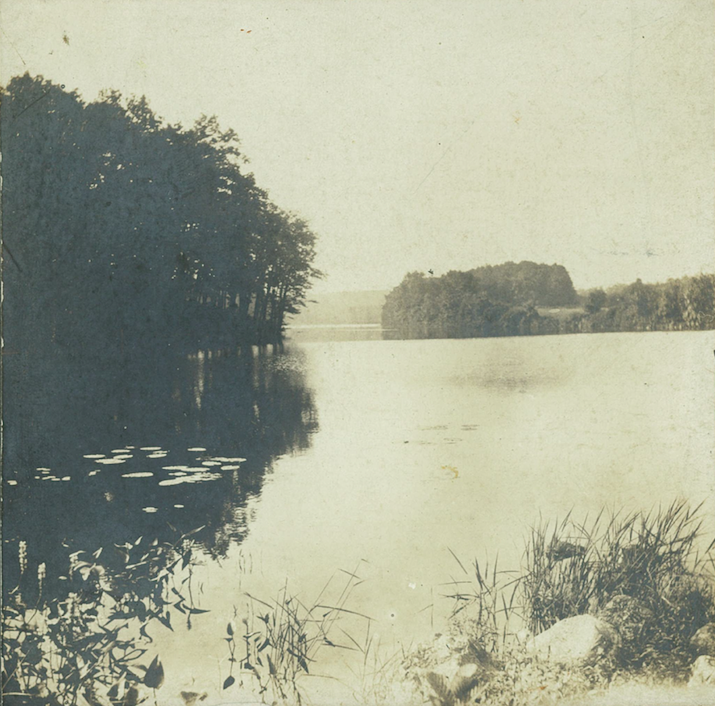 Inspired by a donation from the Carrol-Ogden family to the New Canaan Museum & Historical Society, featured today is the Siscowit Reservoir off of Bowery Road just south of the New York border.

John Raymond was probably the first to dam the Rippowam River to create the pond known as Raymond’s Pond.  He owned the surrounding land in the 1700s, and he may have built the first sawmill in the area as well.  (The remains of this mill were  still visible in the early 20th century just a few feet from the current dam.)  Around this same time, there was also a “Pocks House” on the west side of the pond towards Barnegat Road to treat those infected with smallpox.

In 1848, when Thomas Anthony Comstock replaced the old sawmill with another on the pond, the name was changed to Lake Anthony.  Thomas and his wife had ten children, including the  Anthony Comstock who fought a tireless crusade against vice as the Post-Master, and self- appointed guardian of public morals, in New York City.  To make the name of the pond even more confusing, the Comstocks did not live near the pond or the mill, but a 1856 map shows one dwelling by the pond.  This house was owned by Tom Mead, so at the same time that some were calling it Lake Anthony, others called it  Mead Pond.

The Comstock mill changed hands in 1867 and was bought by Jefferson Barlow Ogden. Due to the shallowness of the pond, it started to be called Mud Pond. By this point a small community had developed along the southern shore of Raymond/Anthony/Mead/Mud pond.  There was a general store, a blacksmith, an ever-present sawmill, and a number of houses, including one owned by Henry Peatt, a Civil War veteran, part time saloonkeeper, and charcoal maker.

In 1893 the mill, now run by Jefferson Ogden’s sons Stanely and Arthur, was torn down and rebuilt.  This new mill was known as the Bowery Mill, and was both a saw and grist mill.  Wood lathes  were also installed which made couch legs for the New Canaan Couch Company.  Three years later, Stanely bought out his brother’s stake in the mill.  But Arthur installed looms on the second floor of the mill and started a rug-making business.

In 1891 the Stamford Water Company purchased the pond for $5,000 and, over the next few years, bought up the surrounding land.  Eventually a new larger dam was built extending what was now a reservoir.  The name was changed once again, this time to Siscowit Reservoir.   Siscowit is an indigenous word meaning “muddy place.”

Due to its remoteness, this area of New Canaan and New York was a bit lawless.  A number of saloons in the area sold alcohol regardless of what laws were on the books.   In one, built over the New York-Connecticut border, the owner allegedly moved his booze across the bar into the Connecticut side when he was raided by the New York police for illegally selling liquor.  And Tom Mead was known to stretch his liquor supply by diluting it with pond water.

Gambling was common in the area as well. In the January 12, 1939 edition of the Advertiser, a 1:30 am raid of the Mud Pond Literary, Soup, and Marching Club  was featured on the front page.  The members of the club were playing craps in one of the cabins along the shore of Siscowit Reservoir.   Once they realized they were being raided, they bolted.  One member tried to escape through the chimney, but got stuck.  A handful of men fled and eventually completed the four mile walk back to town.  A total of fourteen men were arrested.

But there were some wholesome activities in the area.  The Bowery Mill rented out boats in the summertime and sold snacks and drinks from a small shack on the shore.  Various small cabins with names such as “Whippoorwill Cabin” and “Camp Amicastra” were built along the shore for out of town visitors. The Boy Scout campground operated to the west of Bowery Road.  The area was popular in the winter as well. Many walked across the ice and roasted marshmallows on an island in the pond.   A group of men tried to take their Model T across the frozen pond.  It fell through, but luckily was recovered.

In 1972, the Stamford Water Company dredged the pond and rerouted Eastwoods Road to expand and improve the reservoir so that the above c. 1910 photo could never possibly match what the reservoir looks like today.