The food drive that New Canaan-based nonprofit organization Filling In The Blanks ran that day had already been a huge success.

Held May 21 at New Canaan Library, it saw about 100 vehicles come through and raised some 5,200 individual food items for the organization, according to co-founders and co-Presidents Tina Kramer and Shawnee Knight. Launched in 2013, the organization provides thousands of area children in need with weekend meals. 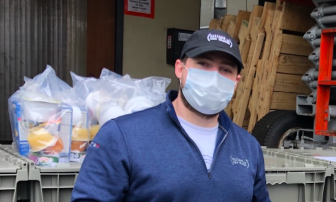 The generous donations at the food drive organized with the library are especially important at a time of wide food scarcity, Kramer said. ”We are having difficulty purchasing the food we need, because the sources we usually use are not able to get us the items we are used to, so we have to buy retail,” she said.

At about 5 p.m. that Thursday, members of the Filling In The Blanks team were unloading a truck of food at the organization’s Norwalk warehouse when the driver, 2012 New Canaan High School graduate Hunter Van Veghel, spotted a few young kids playing basketball at a shuttered school nearby.

So Van Veghel handed a bag of about 12 apples to the kids, Kramer said.

“The kids ran home and obviously told people in their neighborhood or housing apartments about this, that we were unloading this food, and they were so desperate that they just walked over,” Kramer said.

“First a mom showed up and then a dad and then another woman showed up that was pregnant and didn’t speak English,” she recalled. “And they asked us for food.”

The son of Ronna Van Veghel, who works in IT for the New Canaan school district, Hunter is “extremely kind and compassionate,” Knight said.

“He is from Norwalk, so I think he also feels very proud to be doing his job and he understands how important it is,” she said.

Kramer said it was serendipitous that Filling In The Blanks had apples when the kids asked for them.

“We never have apples,” she said. “It was from the food drive.”

[Editor’s Note: This is the third installment of our “Quiet Heroes” series. We’re accepting nominations for it, see guidelines here.]