After two inconsistent performances in wins over Ludlowe and Greenwich, the third time was definitely the charm for the New Canaan High School boys basketball team. 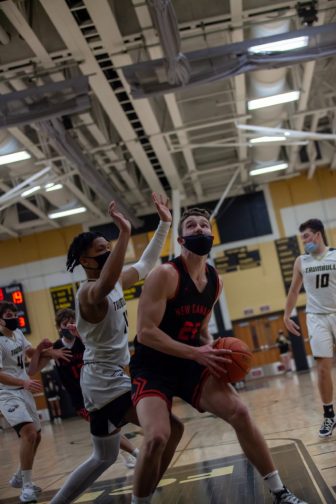 The Rams put together a relentless performance over 32 minutes in a 55-36 road win Tuesday night over Trumbull.

“We played really, really well in spurts and were certainly more consistent than we were in the first two games,” New Canaan head coach Danny Melzer said. “I think there’s room for improvement and the best part is our kids feel the same way. They’re not satisfied.”

New Canaan never trailed in the contest and led by as much as 26 in the win. Senior co-captain Christian Sweeney paced the Rams with 17 points, including eight in the first period which saw New Canaan jump out to a 14-6 advantage. 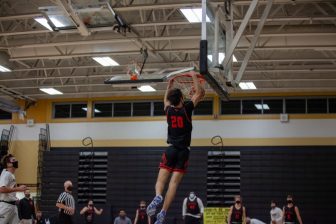 Senior co-captain Leo Magnus continued his solid play this season, scoring 12 points—his third double-digit performance in as many games. Senior Denis Mulcahy was a revelation, adding 10 points and establishing his presence on the offensive and defensive boards for New Canaan, which improved to 3-0 on the season. 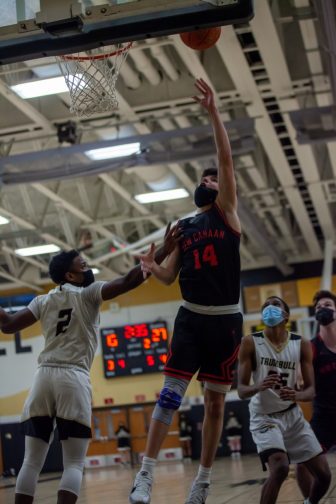 “Denis was awesome,” Melzer said. “He made a nice little corner jump shot that kind of iced the game for us. He’s so valuable to our team and does so many good things. He does everything. He plays both ends of the floor and is such an unselfish player and great teammate. He’s really a pleasure to coach.”

After trading baskets to open the game, New Canaan took a 5-2 lead it would never relinquish on a three-pointer from senior co-captain Will Bozzella at the 4:48 mark. A three from Magnus extended the lead to 8-2. Sweeney closed out the first quarter scoring for New Canaan by reeling off the Rams’ next six points, including a buzzer-beater that made it 14-6.

The Rams outscored the Eagles 19-13 in the second quarter with 10 of those points coming from Mulcahy and sophomore Blake Wilson. A baseline layup from Bozzella and consecutive baskets from Sweeney put the Rams up 33-16. Trumbull’s Connor Johnston hit a corner three before the buzzer sounded, cutting the New Canaan lead to 33-19 heading into the half. 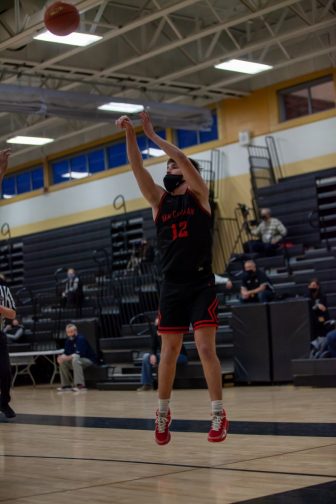 New Canaan put the game away in the third quarter on the strength of an 11-3 run to open the half. Trumbull fought to keep pace on the strength of the play of junior Johnny McCain who scored 8 of the Eagles’ 11 points in the quarter. Trumbull headed into the fourth on an 8-2 run, but still trailed 46-30.

The Eagles got as close as 14 points down in the final stanza on two occasions. Both times, the Rams answered. Mulcahy had a strong take to the hole to give New Canaan a 50-34 lead and on the ensuing Trumbull possession made a steal and pass to Magnus who finished with an electrifying dunk—a perfect exclamation point to an impressive, complete New Canaan win.

“Any time you win on the road in the FCIAC you’re excited about it,” Melzer said. “Where we go from here is that we continue to improve and continue to get better. Clean up some of the things we need to clean up on offense, focus on the defensive end and get better there as well. Our rebounding was good for the most part but we still need to improve. We have work to do. Our end goal is still a month away.”