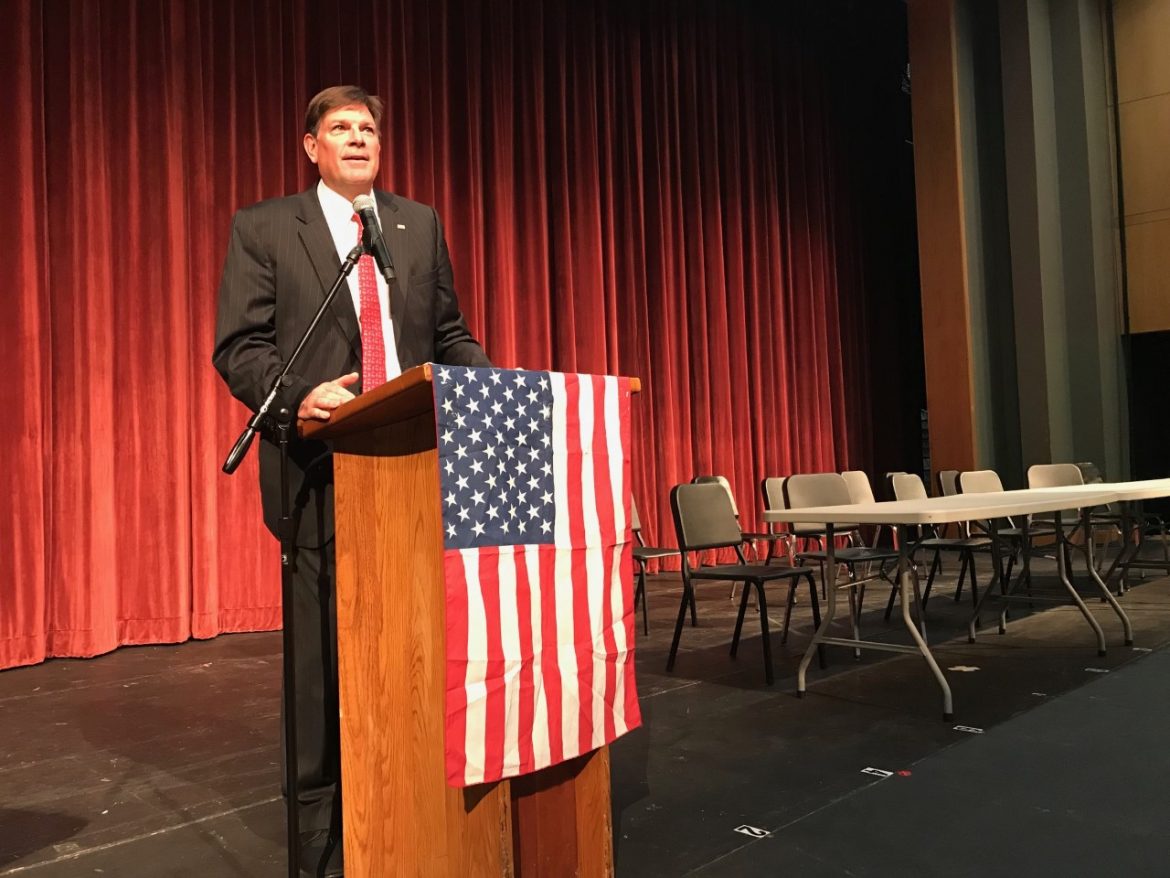 In a dramatic vote Tuesday night, New Canaan Republicans endorsed a new slate of Board of Education candidates who are seeking to reset the priorities of the influential elected body and how it interacts with district administrators.

The incumbent chair and secretary of the Board of Ed both fell short of securing party backing at the GOP caucus, held at New Canaan High School.

The high vote-getter among school board candidates, Dan Bennett, said during the 2.5-hour caucus that the campaign he, Hugo Alves, Philip Hogan and Julie Toal ran has been “focused on improved transparency, a more accessible Board, accountability to the community and parents and better communication to the community and engaged oversight.”

“Our platform has had a few things—kids come first, and that means in everything,” Bennett said. “In academic excellence, in school start times implementation, in block scheduling, in trying to keep schools open full-time for kids heading into next year and certainly trying to get masks off kids so that they can have the most normal learning experience possible in this great school system. Secondly, it is transparency, accessibility, accountability and oversight. It’s really dovetailed into curriculum oversight. We think it’s important for the Board to have active and engaged oversight over the administration. The Board is the elected and only representatives for the taxpayers, the parents, the community and the students in town. And we view that their goal is to oversee the administration related to curriculum. Unfortunately, to date, they’ve delegated a lot of that responsibility to the administration. It’s actually taken a lot of the transparency and the public access as to how the curriculum is developed out of the hands of the Board and into the hands of the administration.”

Bennett added that “the administration does an excellent job.”

“All we’re saying—they will draft curriculum. They will craft it. They will work with experts to do it. But we want the elected Board to have an active oversight role over curriculum. We think that that’s really important for parents in the community. And lastly, fiscal common sense. It rings true to everyone in this room, I’m sure. We have a huge school budget. We want to pay top dollar for the best education for all our kids. Our school system is the town’s biggest asset. That being said, it’s another situation where we want the Board to be more engaged with an oversight function. To get more time with the budget. To be able to question the administration about increases in expenditures with a view of delivering the best educational outcomes in the classroom for students, but not growing the administration needlessly.”

Bennett, Hogan and Toal will seek election to four-year terms on Nov. 2. Alves is seeking to fill two years of an unexpired term on the Board of Ed.

What follows is a table showing how GOP caucus voting went. While backing the incumbent town clerk and two incumbent members of the Town Council, Republicans also endorsed two political newcomers for the legislative body (click on a name to read his or her pre-caucus Q&A with the New Canaanite):

Board of Ed Chair Katrina Parkhill told NewCanaanite.com in an email after the caucus, “I am proud of my service to New Canaan, the Board of Education, and the way we led and supported our students through the pandemic. I offer my congratulations to the nominees elected by the Republican caucus.”

It’s unclear whether there will be contested races in the Nov. 2 election. The Democratic Town Committee typically takes nominations from the floor at its own caucus—this year, the DTC’s endorsement meeting will be held July 26.

First Selectman Kevin Moynihan and Selectmen Kathleen Corbet and Nick Williams all have said they will seek re-election to their current seats on the Board of Selectmen.

Kimberly Norton, who won GOP endorsement to the Town Council along with Luke Kaufman and incumbents Tom Butterworth and Penny Young, said moments after the tally had been read that she was “super excited.”

“I think it was an awesome race with some wonderful candidates,” she said. “I was hoping James Yao was going to make it. But he’s going to stay involved. Luke, James and I have formed a really strong alliance and we’re going continue with it.”

Norton in her speech said that she “gained a deeper appreciation” during her campaign for the town and its residents’ thoughtfulness and care for New Canaan. She described her mission as ensuring that “our government remains responsive and accountable to taxpayers, students, local businesses and elderly residents. I will protect property values, our excellent schools, downtown vibrancy and our historic and natural landscapes.”

Many of those who earned party backing at the caucus said they were seeking to bring more New Canaan voices to government.

Kaufman in addressing the caucus congratulated all candidates on running “excellent” campaigns and said that he and his family planned to be in New Canaan for decades.

“I would like to apply my personal and professional experience to continue to improve our way of life in this town,” Kaufman said. “There are large generational shifts occurring in this town that were accelerated by the COVID pandemic. We have seen many new families move in and long-term residents move out. While it’s heartwarming to see new families begin their journeys and lives in New Canaan, I’m saddened to see long-term residents moving, taking their New Canaan pride with them. I want to work to be as helpful as possible in town, making New Canaan attractive for all ages. I want a voice for all New Canaanites.”

Many of the night’s most memorable speeches came during the Board of Ed portion of the caucus.

Toal said that New Canaan is “a beautiful town” and “a red town.”

“It’s a red town,” she repeated, “in a blue state. Living in Connecticut, we can’t turn on the news without hearing how we need critical race theory and mask mandates. My friends in red states don’t hear about these issues on their news channels. Why? Because those issues don’t seem to exist there. But they exist here, in a red town in a blue state.”

Toal said she decided to run for the school board in part to try and figure out a way to ensure that schoolchildren do not have to wear masks.

“Our children have carried a tremendous burden in the past 18 months,” she said. “While our current Board did a wonderful job navigating COVID and we thank you for that, it is time to move forward. We have pressing issues at hand.”

Toal added, “Let’s let kids be kids again. Let’s make it our responsibility to shield our children from what’s coming down the pike. There’s a showdown right now between science and common sense. We’ve patiently waited for universal consensus. But it’s time to make a call. Time for masks to come off. Our children need to see their teachers smile and our children need to smile back. Today’s world is riddled with negative forces. We need to fight for our values and keep race-obsessed agenda out of our schools and return to our fundamental principles.”

Though Toal did not address the Board of Ed’s role in curriculum explicitly, she said, “Our kids should learn about art in art class. Math in math class. Classic literature penned by renowned authors we have respected and admired for centuries. They should learn about American history, about the great people who fought for and established our republic. About injustices overcome, the events that helped shape the freedoms that Americans enjoy today. Our children should be proud to be American. They should say the Pledge of Allegiance in class with pride. Instead, all the core values on which this country was founded are being erased day by day.”

Toal said that in the course of campaigning she came to realize how many “closet Republicans” New Canaan has, and took aim at what she called “Internet bullies” who “dictate” and “refuse to hear our opinions.”

“They have forced many of us into hiding,” Toal said. “Enough is enough. We need to get back and not let our future get bullied into being closet Republicans. No matter what happens [at the caucus], I want to continue to make it OK to be a Republican. When I moved to New Canaan it was red. But the blue is bleeding in and it’s bleeding in fast. I’m ready to fight the good fight and keep New Canaan red.”

Hogan in addressing the caucus thanked his fellow GOPers for their years of service on the Board of Ed, and said that regardless of who wins party backing on the night, Republicans will “break bread and support” one another.

He said that while campaigning at the dump last week, he encountered a resident who “was arguing in bad faith” by saying Republicans “couldn’t move forward until we found our moral compass,” when in fact the man wanted a “fractured Republican party.”

“But bad faith aside, I had to marvel at this guy and how superior the left is from a tactical perspective,” Hogan said. “They are unrelenting. Think about this: On a national level, Democrats control the presidency, the Senate and the House. All three branches of government. Statewide, they have the governorship, the state Senate, the General Assembly by wide margins. They control the media, social media, Hollywood, higher education, public and private schools, corporations. Literally everything. And yet somehow I’m at the dump playing defense against this guy. And Republicans are still on the defensive, both nationally and here in New Canaan. Why? I for one am tired of playing defense. It’s hard to get excited when you only play defense. It’s hard to score when you only play defense. And it’s especially hard to build and sustain a political party if its members never get to play offense, never get to score and never win anything meaningful in terms of elections and policy. I want to go on offense, I want to stay on offense. I think it’s time for the New Canaan Republican party to change the state of the party and start thinking that way. Don’t waste another second of your lives engaging with folks from 203 Action or other dishonest people.”

Bennett also referred to some New Canaan Democrats in addressing the caucus. The “most interesting, the least surprising part of the campaign in the last six weeks has been the attack from some of the loudest, most leftist progressive voices in town,” he said.

“And I’m not saying it’s all people, but it’s been pretty far out there,” Bennett said.

He said that he and fellow Board of Ed candidates had been the target of insults from Democratic leadership in town recently and that “it’s an ugly look.” In addition to gaining “strong local control” and pushing back against Hartford, Bennett said he would seek to “push back on some of the fringe loudest voices in this town.”